Inside The Life Of Slain Iranian Commander Qasem Soleimani

Police Officers were called to reports of a burglary On Saturday, where thieves made away with a Ksh 180 million toilet that was set and installed in a wood-paneled room at Blenheim Palace, the birthplace of Sir Winston Churchill, in the United Kingdom.

“The piece of art that has been stolen is a high-value toilet made out of gold that was on display at the palace. The artwork has not been recovered at this time, but we are conducting a thorough investigation to find it and bring those responsible to justice.” DI Jess Milne of Thames Valley Police said.

Thames Valley Police is investigating the burglary of a piece of art from Blenheim Palace. The force received a report of a burglary at Blenheim Palace in Woodstock, Oxfordshire, at 4.57am today (14/9). The offenders broke into the palace overnight and left the scene at about 4.50am. No-one was injured during the burglary. Detective Inspector Jess Milne, said: “The piece of art that has been stolen is a high-value toilet made out of gold that was on display at the palace.

“Due to the toilet being plumbed into the building, this has caused significant damage and flooding. We believe group offenders used at least two vehicles during the offense. The artwork has not been recovered at this time but we are conducting a thorough investigation to find it and bring those responsible to justice. Residents will see an increased police presence in the area while officers and staff carry out inquiries. I am appealing to anyone who saw or heard anything suspicious in the area to contact police. You can call us on 101, quoting URN 273 (14/9), visit our website or visit a police station.” Reads Police Report

A 66-year-old man has been arrested in connection with the theft. The burglary has left the palace with significant damage and flooding. The toilet, designed by the Italian artist Maurizio Cattelan, had been plumbed in and was available for visitors to use.

The artist who made a solid gold toilet reportedly worth £1.8m has denied orchestrating its theft in a Banksy-style prank.

Here is the 18-carat working toilet 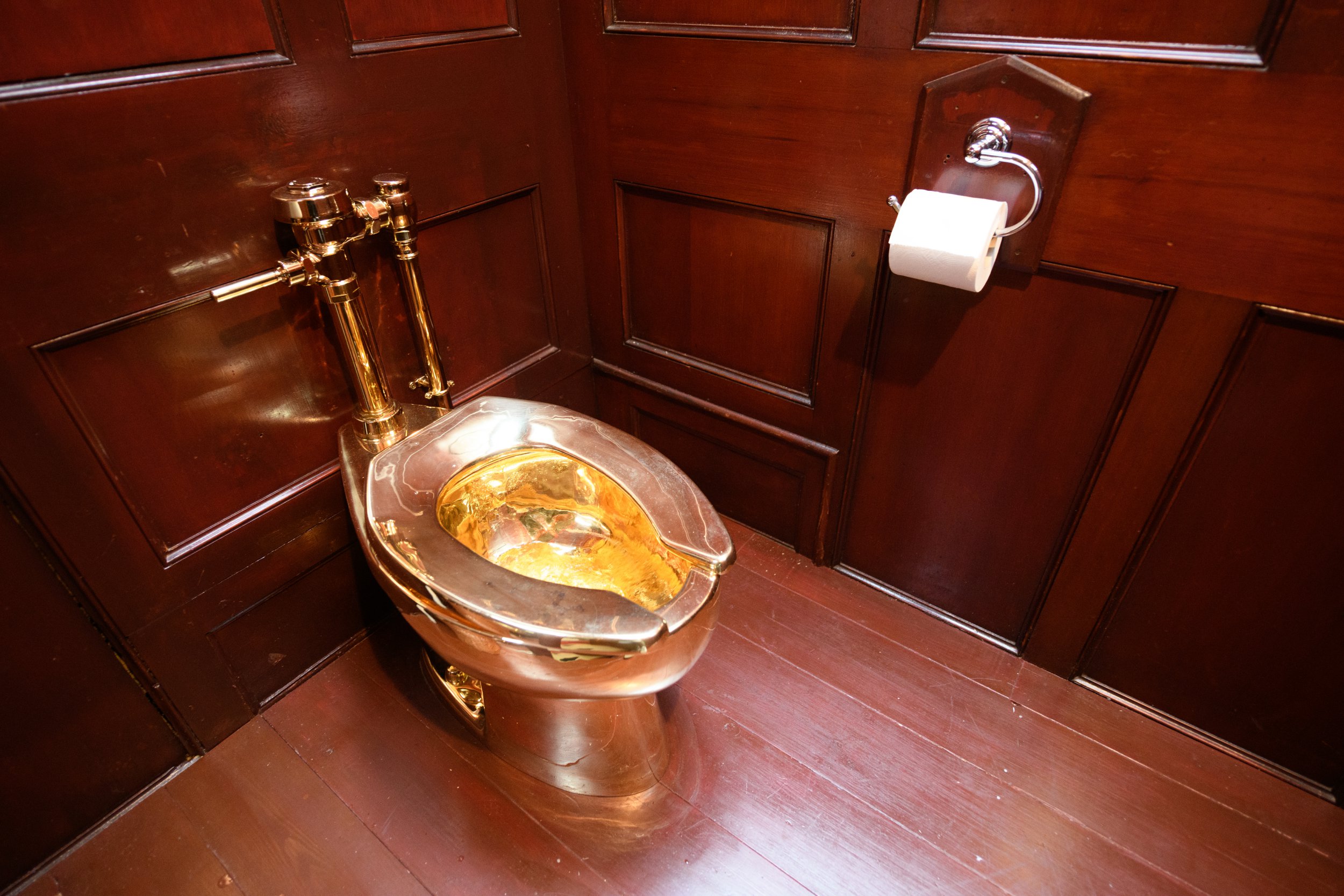 The Italian artist Maurizio Cattelan, who created the sculpture entitled America and who has a track record of playing mischievous stunts, told international media that he wishes the theft was a prank.

“Who’s so stupid to steal a toilet? America was 1% for the 99%, and I hope it still is. I want to be positive and think the robbery is a kind of Robin Hood-inspired action.” He said.

Cattelan, 58, is understood to have attended a reception party at the 18th-century Oxfordshire estate on Friday, marking his first UK solo exhibition in two decades. The sculpture was the centerpiece of his new show, which opened on Thursday.

Thames Valley Police believe a gang of thieves using at least two vehicles were responsible for the theft and a 66-year-old man arrested on Saturday remains in police custody.

Last year, onlookers at a Sotheby’s auction were stunned when, just after it had sold for more than £1m, the canvas began to pass through a shredder installed in the frame. That stunt was said to have made the piece more valuable.

In Amsterdam in 1996, Cattelan previously stole the whole show of another artist at a nearby gallery and tried to pass off the exhibition as his own work.

He said at the time the theft was a survival tactic after being given only two weeks to produce work for his exhibit, saying I took the path of least resistance. It was the quickest and easiest thing to do,” according to media sources.

Initial reports had said the golden toilet was worth an estimated £1m, but Blenheim Palace’s chief executive, Dominic Hare, said it has been valued at about $6m (£4.8m).

The sculpture hit the headlines last year after it was offered to the US president, Donald Trump, by the chief curator of the Guggenheim in New York, its former home. The golden toilet had proved popular at the Fifth Avenue museum and had been described by critics as a pointed satire against the excesses of wealth.

“Whatever you eat, a two-hundred-dollar lunch or a two-dollar hot dog, the results are the same, toilet-wise,” Cattelan said jokingly.

Inside The Life Of Slain Iranian Commander Qasem Soleimani

Billionaire Michael Bloomberg To Run For US President In 2020