Yesterday, Manchester City was banned from Champions League for two seasons by UEFA and fined 30 million euros. The Union of European Football Associations (UEFA) declared on Friday it has banned Man City for serious breaches of financial regulations. 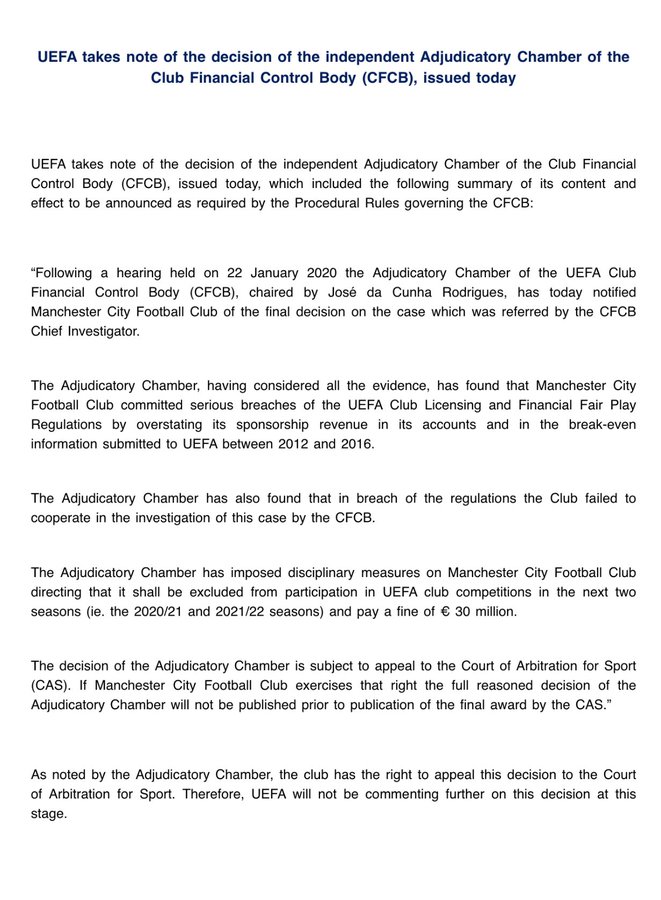 “Manchester City is disappointed but not surprised by today’s announcement by the UEFA Adjudicatory Chamber. The Club has always anticipated the ultimate need to seek out an independent body and process to impartially consider the comprehensive body of irrefutable evidence in support of its position.

In December 2018, the UEFA Chief Investigator publicly previewed the outcome and sanction he intended to be delivered to Manchester City, before any investigation had even begun. The subsequent flawed and consistently leaked UEFA process he oversaw has meant that there was little doubt in the result that he would deliver.  The Club has formally complained to the UEFA Disciplinary body, a complaint which was validated by a CAS ruling.

Simply put, this is a case initiated by UEFA, prosecuted by UEFA and judged by UEFA. With this prejudicial process now over, the Club will pursue an impartial judgment as quickly as possible and will therefore, in the first instance, commence proceedings with the Court of Arbitration for Sport at the earliest opportunity. “

Man City is estimated to be the fifth most valuable football (soccer) team in the world at $2.7 billion, according to Forbes in 2019. The club is owned by City Football Group, a holding company of Abu Dhabi United Group, which is a private equity firm owned by Sheikh Mansour bin Zayed Al Nahyan, the deputy prime minister of the United Arab Emirates and member of the Abu Dhabi royal family.

Sheikh Mansour, worth an estimated $22 billion, is the half brother of UAE President Khalifa bin Zayed Al Nahyan. Mansour bought Man City in 2008 for a reported £210 million — or roughly $273 million based on current exchange rates. In total, Mansour has invested more than $1.7 billion into the club.

Clubs that may qualify for Champion’s League after City ban

CAF to stage super cup final in Doha despite controversies

Religion Is A Scam: Kenyan Men That Married Muslims Without Converting