Murayas And Gatabakis: A Case Study Of Why You Should Avoid Diamond Properties Limited

In 2007, two couples — Peter Kiarie Muraya and his wife Susan (more famously known as Suraya), and Dr Samuel Mundati Gatabaki and his wife Nancy — came together to execute what was sold to unsuspecting Kenyans as a grand idea.

The proposal was for the four to start a joint venture in which the Gatabakis would contribute the 105 acreage and the Murayas the equivalent in cash. The name of the special-purpose vehicle would be Muga Developers Ltd, and through it, they would build Fourways Junction Estate.

Thirteen years later, the agreement has come a flopped terribly and has left the two parties accusing each other of fraud. Who is a bigger thief here?

The Gatabakis claim to have unearthed a web of underhand dealings that have altered the original plan, saddled them with loans and put them at risk of losing all the land.

Documents recently filed with the High Court in Nairobi on the matter read like a thriller, with the Murayas accused of attempting to dispossess the Gatabakis of their land through forgeries, with the assistance of various government offices.

Dr Gatabaki and his wife say the Murayas lied about their ability to finance the housing project during the negotiation and execution of the joint venture agreement, and that all they wanted was access to the title deeds to use them as security to borrow money from banks.

“The joint venture agreement was structured on a 50:50 basis, the Gatabakis having yielded 105 acres of their land and the Murayas undertaking to inject monetary capital of equal value towards construction of the housing development on the entire 105 acres,” read the court documents. The 105 acres were to be hived from title L.R. No. 5980 measuring 200 acres owned by the Gatabakis.

The Gatabakis claim that since March 2018, when they first discovered the plot to defraud them, they, along with lands fraud investigator Anthony Macharia Gathatta, have unearthed multiple cases of forgery that were masterminded by Murayas.

But in his rejoinder, Mr Muraya accuses the Gatabakis of lying. He says when they entered into the agreement, the Murayas discovered that the former owned only 47 acres of the land.

Part 3 of 3: Photos And Why You Need To Avoid Diamond Property Merchant 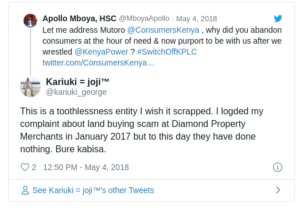 Is This The Cheapest Kenyan Cooking Gas System?

13 Danger Reasons Why We Have Become Guinea Pigs For Huawei