The Deputy President of Kenya, at least for now, William Ruto and Kimani Ichungwa are in trouble after the food donations they made on Wednesday last week.

Here is the video that was shared by a Kenyan on Twitter.

In his message, the DP Ruto, who was in the company of area MP Kimani Ichungwa, said he is committed to ensuring vulnerable Kenyans are supported during this period and distributed food to 600 families in Nachu ward, Kikuyu constituency.

Now, it has emerged that DP wants to poison Uhuru’s people stomachs with an alleged rotten food donation.

“At least 100 people in Kikuyu have been hospitalised in various hospitals over stomach problems after consuming food distributed by William Ruto Foundation.” it was reported.

DP Ruto has been on the receiving front with his generous donations during this pandemic times with an already overwhelming political heat on his shoulders.

Why is William Ruto distributing rotten food probably laced with poisonous substances to the people of Mt Kenya? Why not distribute this food in his own home yard in Eldoret? Distributing expired food just for political mileage then distancing yourself from it. Own it. Sema pole. pic.twitter.com/ReoYBRH9XO

DP Ruto has however responded through Kimani Ichungwa stating that the Landcruiser was allegedly not one of theirs and only came after they had left. 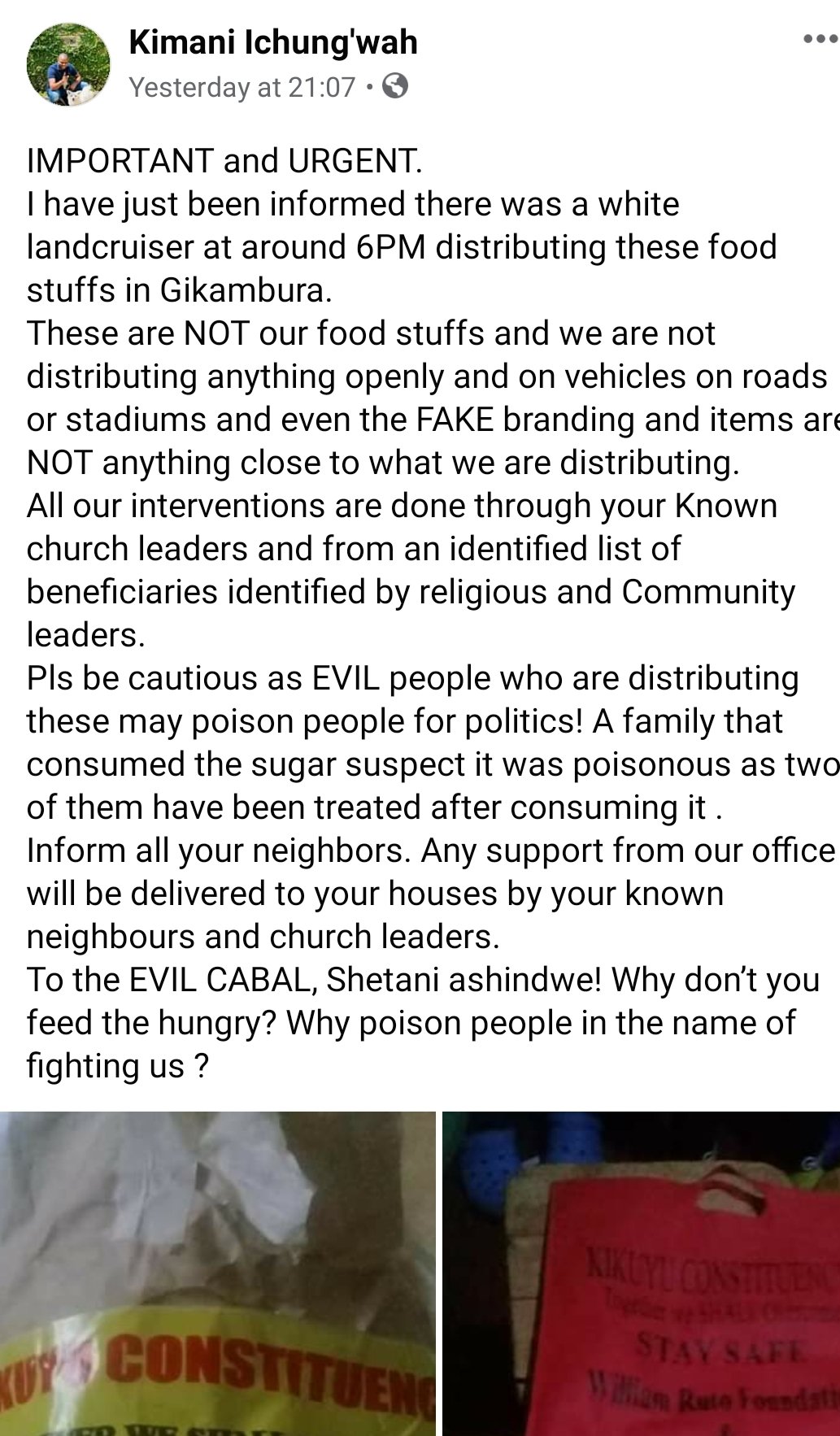 This is coming at a time that the DP is having a rough time in holding together their political marriage in Jubilee party. DP Ruto’s lieutenants are being ejected from key positions that analysts say President Kenyatta and ODM leader Raila Odinga are laying a foundation for the referendum.

Things started going south when Elgeyo Marakwet Senator Kipchumba Murkomen was removed as the Senate majority leader, a move that was believed to be directed at Ruto.

On Saturday, DP Ruto distributed gifts to Muslim leaders who will, in turn, give the same to the less privileged.

“On this last day in this year’s Holy Month of Ramadan, we salute the remarkable spiritual sacrifice our Muslim brothers and sisters have made by praying for Kenya as we battle the COVID-19 pandemic. May Allah open the doors of blessings and joy to you and the country as the marking of Eid al-Fitr approaches,” said DP Ruto.

A section of lawmakers from Central Kenya have however vowed to stick with the DP to the end despite plans to force him out of Jubilee.