Kenyans on social media expressed their shock after one online user and former student shared the racist experience at the Kenyatta family-owned Peponi School, Ruiru.

In the US, black residents are demonstrating against oppression by the whites, following the murder of George Floyd by a Minneapolis Police officer.

Peponi School is an international secondary school in Ruiru, Kenya. It has often been called the premier institution for secondary level education in Kenya and even East Africa and is known to be bragging as the best school offering the British Curriculum in the entire East African region.

According to a former student, many black students who go through Peponi School have gone through hell, and most end up depressed to a point of contemplating suicide.

According to the victim using the Twitter handle @rnbfayz, she was transferred from Braeside High School, another British Curriculum school, but she was ridiculed by fellow students for coming from the ghetto.

Upon arrival, a few students and I were ridiculed by other white and indian students for being "ghetto" && coming from "ghetto schools". FYI, I was in Braeside High School. Another British system school. But you know because black people are the majority, its ghetto.

According to the victim, The Kenyatta-owned school is allegedly a den of depression. Every black student was the first suspects in case anything bad happened in the school, regardless of the evidence available.

I remember one of us wore a skirt that reached her knees, and the house parent + nurse (who are black btw) came to ask her to change because her skirt was too short. Meanwhile, all the white girls wore belts for skirts. She even had to get her dad to come to school to complain.

“The last straw before we all flipped and really gave them the ghetto they deserved was when 3 girls in the dorms had their laptops stolen in the middle of the night. No CCTV evidence throughout the school, nothing. But you know, number 1 suspects had to be us again,” she adds.

At one time, the US politics were used to entrench racism in the school, during President Barack Obama’s debate against John McCain. The ‘white’ students walked around the school chanting “mzungu ni Mungu (white man is god)” while shoving McCain posters in black students faces.

“When it was Obama vs John McCain, these white students walked around the school chanting “Mzungu ni Mungu” while shoving McCain posters in black students faces. Teachers were aware. The school was aware,” she says.

“I say all this to say that systemic racism is very much alive. This was 10 years ago. I really wonder what’s going on there today,” she adds. 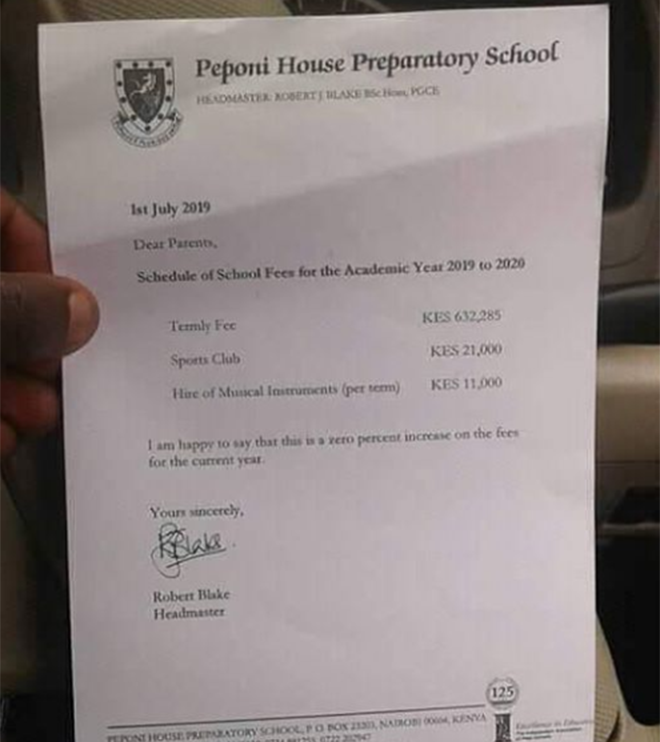 Last year, Kenyans on social media expressed their shock after learning the amount of tuition fee a private Nairobi school charges per term.

This came after one online user shared the fee structure of Peponi House Preparatory School on social media.

The fee structure dated July 1st, 2019 was sent to parents by the institution’s headmaster in the form of a letter and stated the amount to be paid for the academic year 2019/2020.

The letter listed Sh632,285 as the amount to be paid as tuition fees, Sh21,000 for sports club and Sh11,000 for the hiring of musical instruments. The document did not state whether the amount was for day scholars or boarders.

“I am happy to say that this is a zero percent increase in fees for this year,” the principal Robert Blake concludes in the letter.

An independent blog owned by the controversial Kenyan blogger Cyprian Nyakundi has also been highlighting the increased slavery in Kenya. The racial hate slammed on Kenyans faces in their own country.

DPP REACTS TO BEING LINKED TO AN ASSASINATION PLOT