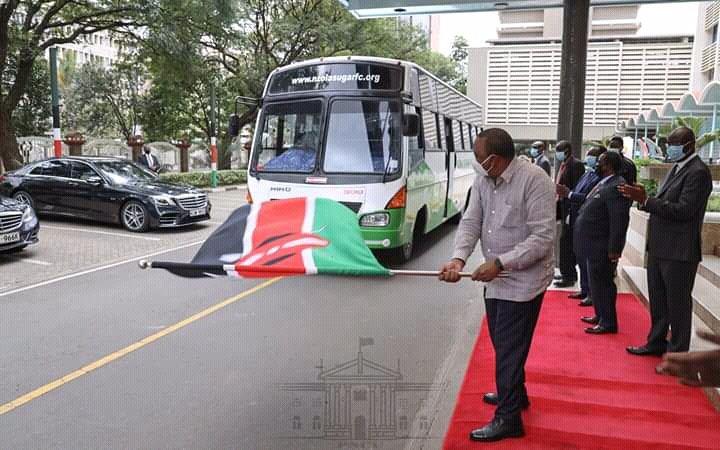 Hail the Bus launchers, WESTERN doesn’t  NEED busses, what we need is a vibrant economy.

The purported voice of western people.
A team of 5 governors, who are uninspiring, failed, corrupt and incompetent.

The Trans Nzoia governor has no single development project to his name, 8 years into his reign. His flagship projects i.e stage and county hospital are on their knees even before completion.

It is said that his Bungoma counterpart WWWW assisted him in eating Kitale stage monies. No one likes him, not even his own family or employees, he is a disgrace to western people and a curse from gods.

Where are my people from Busia? With his only achievement being high tech theft syndicate in everything including elections, resources and funds, the guy has made Busia people to hate devolution.

He has redefined devolution as a swindling avenue. He is one of the smartest exporters with the exportation of Busia developments to Uganda. I hope he contributes a sizeable tax to the government owing to his export history.

Apart from his comical approach on serious issues , the only other achievement Ojaamong has is to maintain the right political wing for sanitization purposes.
Let me not go to the setting up the finance office into flames to literally burn evidence.

My people from Bungoma County. With the ghosts of the ghost project ( Kitale stage) still hanging all over him even before his election as Bungoma governor, WWWW seems to be a master of his looting syndicate.

This one is a pure businessman. He sought power purely for business purposes. Contrary to the rest , WWWW does things with impunity. He openly tenders with his allies who are mps , CECM and friends.

His cabinet is made of up of forefront hooligans, online goons and arrogant individuals . He intentionally started many projects to get multiple avenues for looting.

The dynasty boy knows crystall clear that he is the most unpopular person in Bungoma but blatantly brags that no one can raise 1 billion to compete him in the gubernatorial election.

Infact some of his CECM like my friend Makanda , openly tell off critics , insisting that the looted money will buy Tapiliu even a fifth term.

He has nothing to show, with him watering down noble projects like the Tongaren-bregedia tamarc road into a hoax by filling it with gravel and murram.

Vihigans where are you? The less said about Otichillo the better.
Apart from the fact that he’s a doctor in rain making and has ensured that we experience rain throughout the year, Oty has no other achievement.

No single road tarmacked, no single road murramed, non-payment of medics, hiring and firing of employees are the order of the day.
He is the only governor apart from his Kakamega counterpart who lives in Kisumu , yet he has a home in Vihiga.

In short apart from his incoherent speech , adequate and timely payment of tithe to baba, Oty is a man possessed with demons, a man after his own destruction.

He is in place because we have to have someone in that position because it can’t be left vacant.

The PR professor with a PHD in doing little and propagating more. The gentleman from Buture has mastered the art of impersonation and hijack.

The master of PR has great ability enough to call a one sided stage , a stadium.
His propaganda team is so lean to thwart any efforts of oversight .

No one knows that there are grave corruption allegations on the construction of the governors residence.

The county fertilizer project was a swindling avenue among others like the purported hospital construction which is in progress.

If we are to asses his actual development track record, it can’t go beyond few kilometres of roads and market stalls.

Never mind this is one county in Kenya which receives major allocations apart from Nairobi and Nakuru.

My friends have nicknamed him Oporonya.

This one is not a governor but he can’t be ignored. Why, I also don’t know!

Having been CS consistently from Kibaki time as justice and constitutional affairs minister, through Uhurus first term as Water and irrigation CS and now Devolution CS, he has nothing to show for it.

Yesterday i was irked when he said that he has been a minister for only 3 years for a person who has served for over 13 years as minister.

This is a man under siege with ghosts of Galana Kulalu and other online irrigation schemes hanging loose over him.

To date residents of Transnzoia have no access to clean water inspite of their beloved son being at the helm.

This is the first minister in history to channel his recommendations to an opposition leader, who inturn promised to foward the same to the president.

In a nutshell MCAs in this counties are justified in impeaching this governors, on the grounds of incompetence, gross corruption, over engagement in politics, misuse of funds and even breach of contract with the voters.

If this are indeed the people who represent the views , aspirations and plight of the people of western, then i rather relocate to Makueni.

But i will not adopt the tenage manners that Blogger Cyprian Nyakundi had alleged against the Makueni governor.

Hahaha, you know them. I will not seat down, hear, think and spoonfeed you everything.

Politician haven’t captured the interests of the people, my opinion, they have captured the correct sanitization booth.

In a Coronavirus language, they have a shelter in a time of storm.