The accident occurred at Kamara area along the Nakuru-Eldoret Highway with Cheboi’s Mercedes Benz suffering severe damage on the driver’s side.

According to reports, Cheboi’s car collided head-on with the boda boda rider who was rushed to hospital after the grisly accident, but died.

“The accident happened in Kamara between Mau summit and Molo. It involved a car belonging to the Mr Moses Cheboi. The motorbike was riding from the opposite direction and hit a pothole then veered off towards Cheboi’s car who had little time to avoid the head-on collision,” said Kilonzi.

The boda boda rider was carrying one passenger who was rushed to Molo Hospital where he was admitted after suffering multiple fractures.

Cheboi was driving himself when the accident happened at around 2:40 p.m. on Sunday as he was headed towards Molo.

The Deputy Speaker called for an ambulance that ferried him to Nairobi for further treatment following the accident.

On Friday, in a related story published by a local blog, Kabras East MCA Lazaro Luchebelili was reported to have collided with a boda boda rider at around 10 p.m. 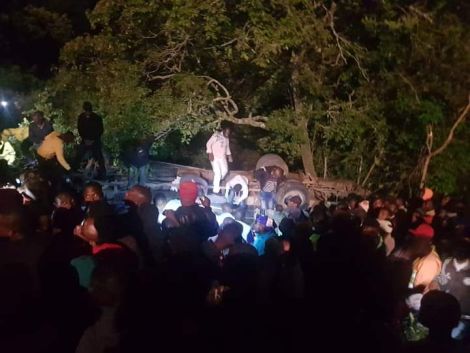 The aftermath of the accident involving a Western Kenya MCA on Friday night, September 26, 2020.