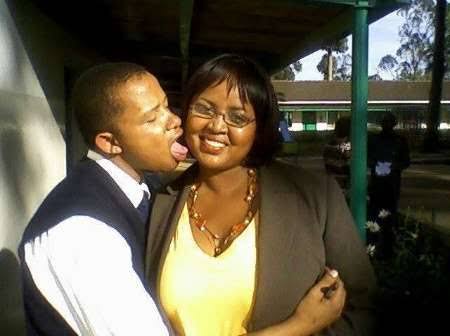 Former Tahidi High actor Dennis Mugo popularly known as OJ has disclosed that his baby mama dumped him a few years ago due to his alcoholic nature.

OJ narrates that the fall from being an A-list star to just a nobody in the society drove him into depression and eventually turned him into a heavy drinker and smoker.

“I got to a point in life where depression ilinigonga, a good one. So I could cover it up with humuor, alcohol, smoking, with a lot of things…while my friends have accomplished a million things, I was still struggling to get to that point…we complain a lot about in society but we forget about ourselves…at some point I as an alcoholic we fucked up and it gets to you

“When everyone is making it and you are there chilling like why not me, then you forget the simple instructions we were given; be discipline, work hard and have a vision. I saw this happening and I think I was proud,” said Dennis Mugo.

Mugo confessed that there is a time the celebrity status got in his head and messed up a lot of things.

“As fast as it came as fast as it left. But as soon as it went, I went into a downwards spiral…then I went into drinking, at that time nimeget my son Ethan, Baby Mama. Siku hizi ni baby mama hizo time alikuwanga wife but akaniacha Sababu ya hii alcoholism. Na depression ya jamaa kuwa top huko A-list to ground zero,” posed OJ.

“I went to boarding school in class 4 but learned to be independent nikiwa Form 4. But all the way nili-learn pia the negative side of life, Alcoholism and smoking. Nakumbuka niliamanza kuvuta fegi nikiwa form two, form three hapo nikaanza kukunywa pombe. I used to drink anything that comes my way. Kuanzia Chang’aa to the high end.

“This is a habit that I picked up and it has affected me years down the line. Am turning 35 but kama kuna kitu nawezataka kuwacha ni smoking… I have been hiding myself in this Episode of Aki si Poa”.

The 35 year old went on the reveals that sometimes he feels bad that he did not accomplish a number of his goals due to his bad habits.

“Do you ever look at your friend and get jealous about their speed of their grow and jow focused they were bad then and you look at where you are and you see your movement is nowhere and it pains you. I remember 2 guys when I was in third year at KIMC, this guys had an idea that they accomplished. Recently they came to Embu and we had a chat with them, this boy are basically millionaires right now.

“I made my first million before them but what did I do with it nothing. They stuck to their first plan in life and they accomplished that’s Wakurugenzi, (Abel Mutua and Phillip Karanja) that even they were up to they accomplished and I didn’t because if my bad habits. Which till today as I turn 35 they are still stack with me” added OJ.