One of the pioneers of Kenyan comedy the late  Charles Bukeko alias Papa Shirandula was on Sunday 13th commemorated by his cast.

Led by Kenneth Gichoya (Njoro) Jackie Nyaminde alias Wilbroda and Jacky Vike alias Awinja, were among those who visited graveyard to commemorate the thespian.

The late Charles Bukeko well-known as Papa Shirandula was hurriedly buried soon after he succumbed to a short illness-which the State says was Covid-19— the allegations the family continue to rebuke up to date.

Awinja took to social media and penned an emotional message revealing that she was yet to come to terms with his demise.

“May uncle continue resting in peace, still hard to believe but a day at a time. I miss him so much, we do, it pains me thinking about it, but God first, it’s a path that we will all take.We came back to celebrate him and we shall be back again and again,” her post read.

Actor Njoro also took to his Instagram page and poored his revived grief even though he soldiered on.

“My brother/ mentor, still resting peacefully, feeling full filled coming back here.The family is happy, but the visit has revived the pain, but we leave it to God a step at a time, is the process of healing,” Njoro stated.

The cast also took time to interact with Papa Shirandula’s family, as they held prayers while surrounding the grave.

The late Charles Bukeko died on the morning of Saturday, July 18, after he was rushed to Karen hospital due to breathing complications.

Many comedians came out in numbers to acknowledge the impact that Papa Shirandula had in their lives.

These included renowned comedian and media personality, Felix Odiwour alias Jalang’o who confessed that his breakthrough in the comedy industry came after his time on the show. 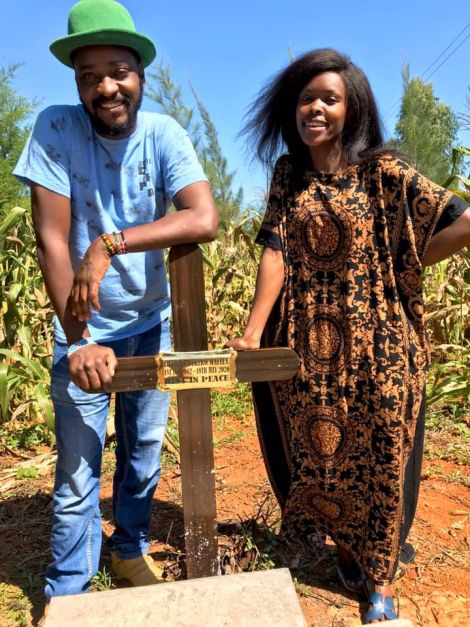 From left to right: Njoro and Awinja
Soon after his demise, Wilbroda, one of Papa Shirandula’s cast and his real surviving widow had slammed Karen Hospital of medical negligence that allegedly caused the death of Bukeko.