It’s clear that people will definitely try to destroy your relationship; especially when you seem to be happy with your partner. Zari’s hubby, better known to many as the ‘Dark Stallion’ is on the receiving end. It took long for Zari to reveal his face to the world, evidently because she feared people ruining what they were building. Most people criticized their relationship and said it would end in premium tears, just like her previous relationships. But Zari cared less about critics and walked into the relationship anyway.

Zari’s Relationship On The Edge?

Zari’s fear might become a reality. Maybe it was better when no one knew his face. Anyway, her hubby is receiving DMs on his Instagram. The ‘Dark Stallion’ claims he wakes up to different message requests. He hates it! And he’s making it clear to everyone who thinks they can convince him otherwise.

The Nigerian ‘Stallion’ , whose name is Jerry Ebi Ebi, is not a fan of social media as such. Posting a screenshot of his DMs, he wrote; 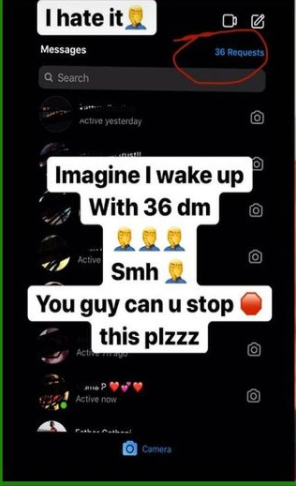 Well, for somebody who is not a fan of social media, 36 DMs in one morning is a lot. He didn’t specify if it’s women trying to snatch him from Zari, but I’m sure they are after him.