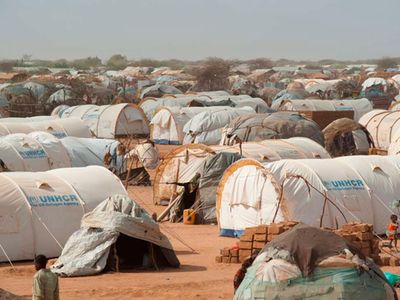 Kenya on Thursday rescheduled its planned closure of refugee camps to June next year, following discussions with the UN Refugee Agency to stagger the shut-down.

As such Kakuma and Dadaab Refugee camps will be closed down by June next year, allowing refugees time to leave gradually rather than in masses.

The decision arose from last-minute lobbying by the UNHCR boss Filippo Grandi who held discussions with Kenya’s Interior Cabinet Secretary Fred Matiang’i and his Foreign Affairs counterpart Raychelle Omamo. Under the new arrangement, at least 15,000 refugees will be let go every month; either to return to their homelands of be resettled elsewhere.

Interior Principal Secretary Karanja Kibicho said the decision is the last considerate move by Kenya to stay within international law as well as protect its national security interests.

“We have been sheltering refugees for over 30 years, and our capacity to host them longer under minimum standards of humanitarian action has been overstretched,” Dr Kibicho said.

“The decision to close Dadaab and Kakuma camps by June 30, 2022 is in our country’s public interest.”

The announcement means that Nairobi has, for the fifth time, delayed its plan to close the camps.

In 2013, Kenya, Somalia and the UNHCR had reached a tripartite agreement to gradually close Dadaab camp. The agreement expired with just a small fraction of refugees accepting to voluntarily return to their country. Further plans have been challenged in court.

On Tuesday, the High Court also suspended Nairobi’s plan. But this came as discussions went on for a staggered closure. The US government also pleaded with Kenya to delay closure of the camps, arguing that Nairobi could violate its obligations if it closed the camps abruptly.

The two refugee camps in northern Kenya, in Turkana and Garissa counties, respectively, have been in existence since the early 1990s when Somalia fell among warlords, and neighbouring countries Sudan, Rwanda and Burundi were in their conflicts.

The government has often accused some refugees of harbouring terrorists, claims the UNHCR has fought.