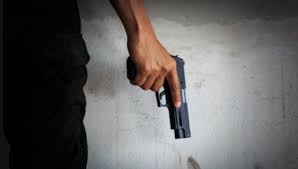 In the
first incident, two armed gangsters who have been fond of terrorizing members
of the public were shot dead in Kawangware.

A statement
by the Directorate of Criminal Investigations (DCI) said that one member of the
gang managed to escape from the scene using a motorbike.

“The
officers who were on foot patrol within stage 56, responded in the nick of time
after the thugs had just attacked a man at gunpoint,” the statement by the DCI
read in part.

Detectives
revealed that the officers had challenged the trio to surrender but the
suspects instead shot at them. The move by the thugs led to a deadly shootout
that led to the death of the two.

The
officers managed to recover one round of 9mm calibre and has been handed to the
DCI ballistic experts for examination to ascertain whether they have been used
in other attacks.

The
bodies of the duo were further moved to City mortuary pending identification.

In the
other incident, police in Kamkunji shot dead an artisan in unclear
circumstances.

Witnesses
told K24 Digital that the artisan whose identity is yet to be identified
was killed following the shootout.

“We head
loud gunshots only to learn that the artisan had been shot in the process,” James
Kimani said.

The body
was on Thursday at 10am taken to the City Mortuary.

Uganda confirms one case of Covid variant from India