‘Umbwa Kwani Mimi Ni Government?’ Akothee Slams Woman For Telling Her To Use Own Money To Help A Fan

Akothee has found herself at loggerheads with a section of her fans after posting a screenshot of a woman who was asking her for help. The woman, by the name Lillian, wrote her grievances to Akothee saying she is contemplating suicide since life is getting harder for her.

Contemplating Suicide! A tired… The three kids have seen it all. Am tired madam, am the first born, in a family of five. Am the only breadwinner since I lost a dad, my mother was left with the kids, na hakuweza kuwasomesha.” 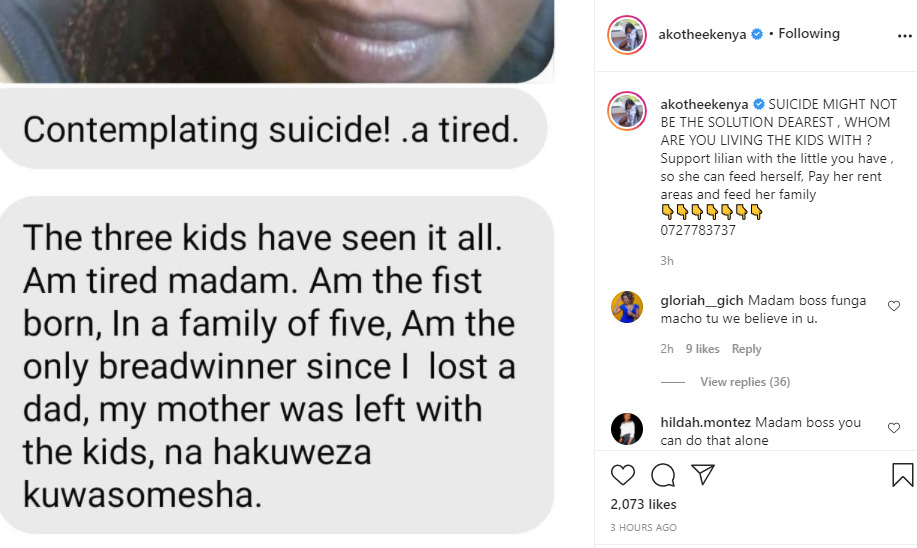 Akothee asked her fans to contribute for her, advising her not to take the suicide route as an option. However, Akothee’s fans thought otherwise. With all her wealth, they told her to sort everything for Lillian.

One of the fans wrote;

”Madam boss funga macho tu we believe in u.”

This answer pissed Akothee and her response;

The fan reacted back saying;

Well, many others thought Akothee could help her out without feeling a pinch as they wrote;

”Madam you can do that without us.nakutambua cheza Kama weee”

”Madam boss you can do that alone”

Akothee definitely has the ability but she has already done her part.

Occupational safety and health, on the World Day for Safety and Health at Work, 2021