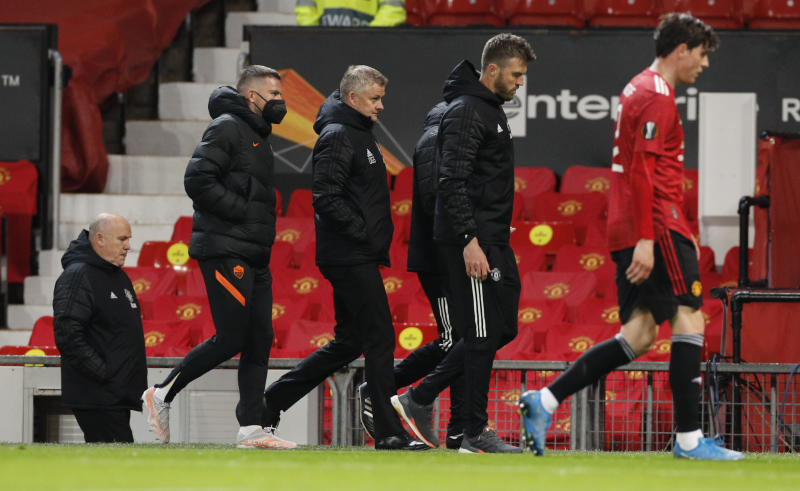 Manchester United manager Ole Gunnar Solskjaer said he would do everything in his power to try and convince striker Edinson Cavani to stay at the club for another season.

The Uruguay international scored twice, assisted two more and earned a penalty to help United fight back from 2-1 down to defeat AS Roma 6-2 in their Europa League semi-final first leg at Old Trafford on Thursday.

Cavani arrived at United on a one-year contract in October with an option of another 12 months, but remains undecided about whether to remain at Old Trafford after a difficult season which included a social media faux pas that resulted in a three-game ban.

“I’m delighted with him,” Solskjaer said. “You can see the difference in him when he’s worked on his fitness. He’s making up for lost time, it looks like.

“He’s more than just a goal poacher and good goalscorer. He’s played for so long that he has that calmness and composure about him. He’s showing his experience. We want the experienced players to step up and he definitely has done.

“He knows I’d love to have him for another year.”

Solskjaer hopes the prospect of playing in front of supporters at Old Trafford can convince the 34-year-old to remain in Manchester.

“I’ve promised him Old Trafford and Manchester is a different place with fans in it,” Solskjaer said. “I’m doing my best. Hopefully, nights like this help him see himself here for another year.”

“We’ve got the best fans. He’s a goalscorer and there’s nothing better than celebrating in front of them.”

United, who are second in the Premier League standings with 67 points from 33 games, host Liverpool on Sunday.