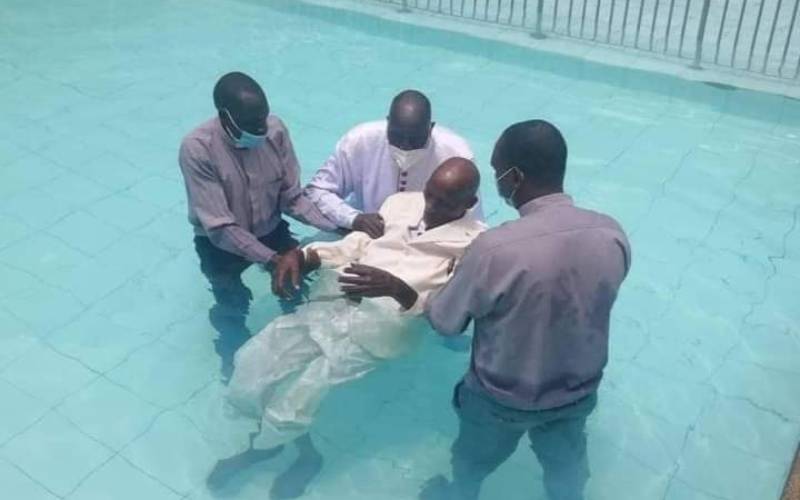 The Men’s conference chairman Mzee Kibor has finally confessed and been forced by retired clergy to be lustrated back to religion.
Mzee Kibor was back on the limelight after he got baptized at a hotel in Eldoret on Monday. The controversial Eldoret farmer-cum-politician Mzee Jackson Kibor was cleansed by retired AIC Presiding Bishop Silas Yego in a swimming pool at The Eldoret Hotel. The ceremony lasted about half an hour.
Mzee Kibor, who was accompanied by his family members, was baptized with the help of the clergy, the 87-year-old was immersed in the water, clad in a white suit and white shirt.
Known in the social media circles as ‘The Men’s conference chairman’, Mzee Kibor, confessed that was old enough and decided to dump the ‘unholy life’ for a peaceful life in Christ.
“Praise Jehovah, when I decided to go to Church I was told that one has to be baptized to be saved. I have made this bold decision to be baptized because life is precious. Everyone needs to be ready since nobody knows the hour or the time. This year, he called a family meeting and sought forgiveness. I am so happy that he has accepted to be saved,” said a jovial Mzee Kibor, moments after he was baptized.
Bishop Yego observed that they were happy after Mzee Kibor decided to give his life to Christ and challenged the aged and the young to seek salvation.
“He approached the church leaders and said he wanted to be born-again. But he first shared this with members of his family. I want to say that it is never too late for one to seek God’s kingdom. Once, Gods’ spirit has really touched one’s soul, it becomes untenable for one to accept God’s ways. The Book of Psalms says that all those who have accepted Christ are like the Lebanon Cedar as they remain strong despite the age and will continue to do the work of the Lord.”
Characterized by fights, the octogenarian hit the headlines in recent times for fighting his wives and children over the property. The tycoon had on December 31, 2020, won a case against his sons and his employees, who had appealed the lower court’s ruling over the same piece of land in Soy, Uasin Gishu County.
Mzee Kibor has had divorce cases that played out in the public, one from Josephine Jepkoech, his wife of more than 50 years. He also was involved in court battles with his sons over land.
Claiming it belongs to him, last month, the farmer suffered a blow after the Court of Appeal in Kisumu temporarily stopped him from evicting his three sons from a controversial property.