Trio Mio is undoubtedly one of the youngest and successful musicians in the local industry. The 16 year old is turning out to be a big deal and has been compared to the late E-Sir. Singer Nameless was one of E-sir’s close friends and did music with him during his early years in the industry.

Nameless and the late E-sir-Google

Trio Mio started singing when he was in class 6, but his professional career got a breakthrough through his song ‘Cheza Kama Wewe’. The song featured renowned Gengetone artists such as Mejja, Nelly the Goon and Exray; who really helped in boosting the song. The hit song has since been viewed over 6.1 Million times on YouTube since it’s release just 6 months ago.

Nameless has congratulated the young musician on his twitter, after noticing how KOT have been comparing him with his friend E-sir. He wrote;

”Keep up the good work

whenever you see yourself being compared to greats like E-Sir then you are definitely impactful. Bless up” 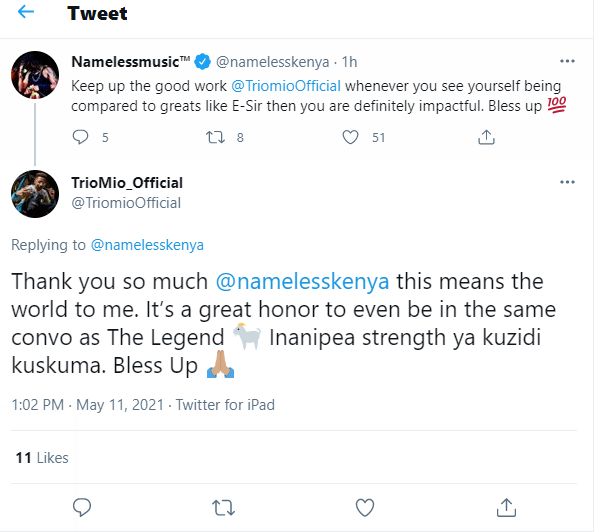 ”Thank you so much

this means the world to me. It’s a great honor to even be in the same convo as The Legend

Talented Trio is still a high school student, whose prowess in coming up with lit lyrics is praised by many for being mature than his age. We can’t wait for another banger from the lad.