US Special envoy to visit Egypt and the Horn 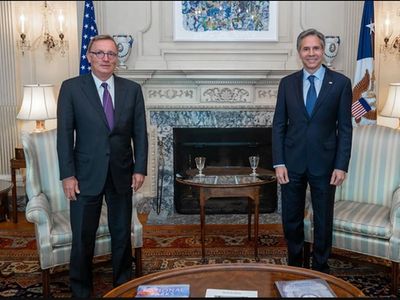 The US is sending its first ever Special Envoy to the Horn of Africa on a trip to Egypt, Sudan, Eritrea and Ethiopia in what the State Department said was to address “interlinked” security issues in the region.

Mr Jeffrey Feltman on Tuesday embarked on a 10-day trip as the Special Envoy of the US to the Horn of Africa. His choice of countries to visit suggests the kind of issues he may address, such as the controversial Grand Ethiopian Renaissance Dam (GERD) on the Blue Nile and the Tigray conflict in Ethiopia.

“Special Envoy Feltman will hold meetings with officials from the respective governments as well as the United Nations and the African Union.  He will also meet with a range of political stakeholders and humanitarian organisations,” Ned Price, the State Department Spokesman, said on Monday night.

“The Special Envoy’s travel underscores the Administration’s commitment to lead a sustained diplomatic effort to address the interlinked political, security, and humanitarian crises in the Horn of Africa, and he will coordinate US policy across the region to advance that goal.”

Ethiopia, Sudan and Egypt have disagreed on the formula for filling the GERD, which could be Africa’s biggest hydropower generation plant with capacity of 6.4GW of power when complete.

But Ethiopia’s unilateral filling of the dam has angered downstream countries Sudan and Egypt. Sudan argues there needs to be a formula of filling so that it can manage its own smaller dams on the Nile. Egypt on the other hand says faster filling will significantly affect the amount of water reaching its territory, affecting irrigation-dependent farming. All the three countries had agreed to an African Union-mediated solution, but a series of negotiations have produced no agreement.

Ethiopia, which argues it has sovereign rights to use the river for its own development, says it will reject any outside entities coming in to mediate, if not the African Union-led process.

An earlier draft mediated by the US was rejected by Addis Ababa who accused Washington of favouring Cairo. Cairo initialled on the document, while Sudan and Ethiopia refused to attend. In international negotiations, initialling on a draft document often signals closure of discussions.

But after the failed US-led bid, the African Union restarted talks. Parties, however, disagreed on the role of experts nominated by the continental body.

The dam may not necessarily cause an inter-state war in the region, given the human and financial costs, but the US thinks its dispute could add to the challenges in the region which require cooperation. Sudan and Ethiopia are also currently embroiled in a border dispute.

For Eritrea, its troops in Tigray have raised controversy after human rights watchdogs accused Asmara soldiers of looting, and raping and killing civilians. Eritrea denies the accusations, but the US has been pressuring Asmara and Addis Ababa to ensure Eritrean troops leave Tigray and that the Ethiopian government allows full humanitarian access to the northern region.

The appointment of Feltman though is an indication of Joe Biden’s attention to the Horn of Africa.

Appointed a week ago, Feltman was described by Secretary of State Antony Blinken as US’s effort to search for political stability and address security and humanitarian crises in the region.

“Of particular concern is the volatile situation in Ethiopia, including the conflict in Tigray; escalating tensions between Ethiopia and Sudan; and the dispute around the Grand Ethiopian Renaissance Dam,” Blinken said in a statement.

“At a moment of profound change for this strategic region, high-level US engagement is vital to mitigate the risks posed by escalating conflict while providing support to once-in-a-generation opportunities for reform.”

Born 62 years ago in Ohio, Feltman served as US Ambassador to Lebanon and as Assistant Secretary of State for Near Eastern Affairs during the George W Bush and Barack Obama administrations. He has been serving as the UN Under-Secretary for Political Affairs, directly charged with programmes for mitigating conflict.