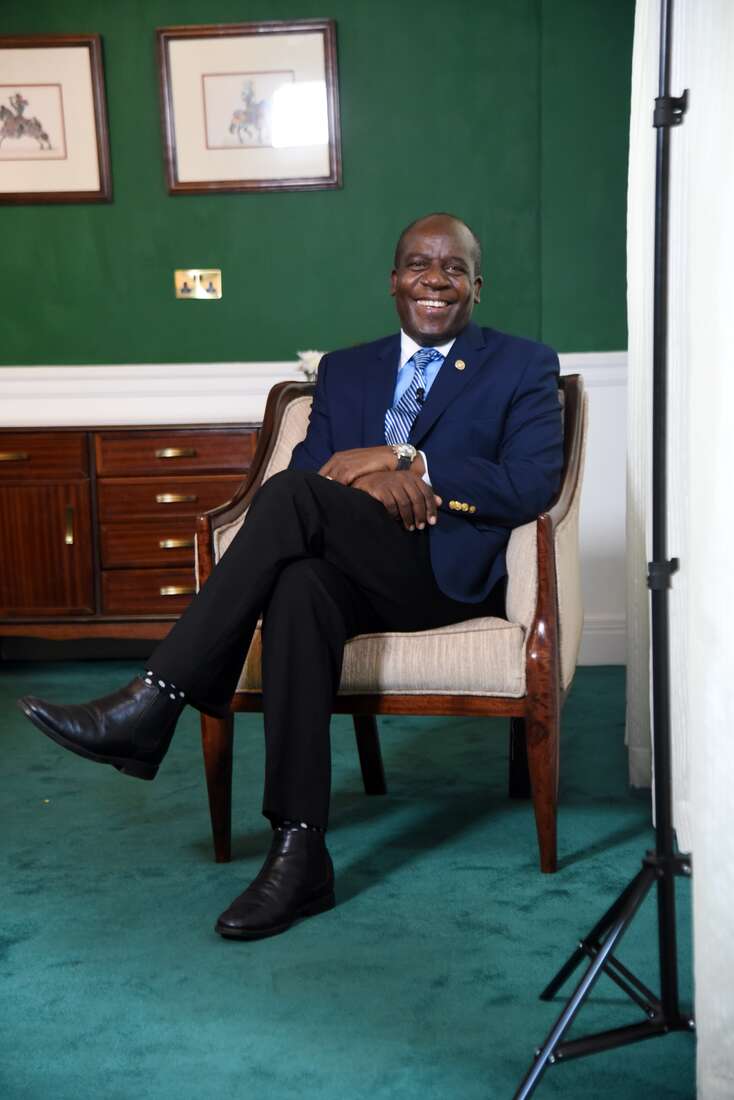 Charles Mudiwa, the CEO of Stanbic Bank, holds court in a small boardroom in a country club that requested not to be mentioned in this article. Suited executives bearing studious mugs, files, and laptops come in and out of this room to have a meeting with him.

Mr Mudiwa, a Zimbabwean, started his executive career in 2002 at Stanbic Bank Zimbabwe handling retail banking operations before having stints as Director of Standard Bank in South Africa, CEO at Standard Bank Malawi and then Stanbic Bank Zambia. He took his current role in Kenya in 2018.

After almost three decades in financial services, in his vein runs the blood of banking and it reflects in his disposition.

An avid reader and a man drawn to deeper existential questions about purpose and legacy, he spoke to JACKSON BIKO on a nippy morning.

How many children do you have?

Is that the first question? [Loud laughter]

It’s not a trick question.

What do you remember about the day your first child was born?

Oh yes! I even have a visual picture of it. I was in Harare. It was in the morning and we were at my father’s house. I remember my dad giving him the name Tawanda, which in Shona means ‘we are now many.’ I still remember where we were sitting in the living room and my father was giving me a lecture about being a father. I was in my 20s.

You are in your late 50s, what decade of your life do you remember fondly and why?

My early 30s. This is when I moved into executive-level management, the C-suite. But it’s also when I started to be clear about what I want to be, where I was going and where I wanted to be. I look at life in four phases. The first is what I call the knowledge phase; education and whatnot.

The second is the primary accumulation phase; you leave your mother’s house, you buy a stove, a fridge etc. Every shilling then matters. Then the third is the status phase or the hierarchy phase. Here you ask yourself; who am I? I’ve seen people leave jobs because they’ve been told you’re going to be a director. Even if that job is small, but they’ll have a card that says director, they’ll move. They’re more concerned about a certain title.

The last phase is when you actualise. I call it the fulfilment phase. And at this point in time, it’s no longer about accumulation and hierarchy and title, it’s about what you can give. Suddenly you’re no longer worried about these things. It’s about what am I giving to? How am I giving back and what can I do differently?

I’m in this stage, people can differ but I think so. [Chuckles].

Of all these stages which one had the most activity and produced the most heat for you?

The second and the third stages because I was trying to establish and find myself. It’s a time of great activity and effort.

When do you think you came into yourself as a man?

You mentioned the one shilling mattering more in the second stage of one’s life. I don’t suppose a shilling matters too much for you right now, does it?

[Pause] I don’t think it’s about the quantity of money that you have, it’s about the needs that you have and how you meet them. You know most of us tend to think that a lot of money makes a big difference. It’s about how you use the little that you have. So even if you have a small amount of money, if you use it well, it can still give you the same level of happiness as somebody who has 20 times more than you have.

Your definition of success must have changed over time, I’m curious to know how you defined success at 43.

I don’t define success at all. I define significance. Because success means you have been measured by a standard that says you have four cars, three houses, which are material things. Significance means you’re being measured by the impact you make. Success is about what you accumulate, which is a relative measure. But the significance is more important than success because significance speaks to impact. There is a book I like to read called ‘Have a Little Faith’ by Mitch Albom. He talks about the first and second death. He says some people die, are buried, and forgotten. Then others are immortalised. Think about William Shakespeare who died hundreds of years ago but he’s still ‘alive.’ We still read his books. We quote him. That is significance.

What do you struggle with now as a man in his 50s?

Now the spirit is willing but the flesh is not. [Laughs] I’m generally healthy and fit but I’m also not 20 years old anymore. This is funny because I feel that internally I’m still the same. I feel like my soul hasn’t grown old, I have the same soul I had as a child. But all around you, the world reminds you of your age.

In Zimbabwe, I have noticed how the young boys who help you park in town have addressed me over the years. At first they referred to me as ‘my big brother’, then mukoma (my elder brother), then ‘my father’, then me seguru (my uncle) and now baba. [Laughs] It’s interesting to see myself transitioning all these phases of life through their eyes.

When were you most fearful?

I can’t remember a time when I was fearful. I’m an optimistic person, so I always take a positive view of life. People say I’m an encourager. Like this week, I have been telling everyone and anyone, that the question they should be asking themselves is ‘what can Covid-19 do for me?’ You can become a victim of Covid, sit in paralysis and wait. Or we can say, okay, what opportunities are opening because of Covid? What can I do differently?

If you’re to meet one person for dinner, dead or alive, who would that be, and perhaps what would you ask them?

[Pause] I’d like to meet God. I’d ask him what His purpose is for the world. But if it’s a human being I think Nelson Mandela would be a very good person to have a conversation with. The tenacity, the focus, the determination, it’s something a lot of us don’t have. I’ve read a lot of his books, it would be nice to just understand what kept him going. How did he do it?

What do you think is the difference between having children and having grandchildren?

When you have grandchildren, you have fun without the cost and the responsibility. [Laughter] I’m not accountable for that. And sometimes you get to watch them frustrate their children as they did to you. There is some joy in that. [Chuckles]