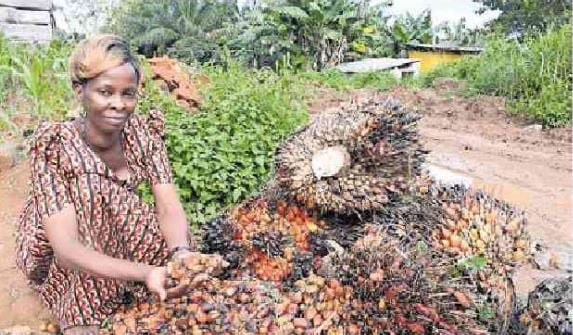 James Lutaya is a successful Ugandan oil palm tree grower in Busanga village, in Kalangala district. He planted 55 acres of oil palm, 30 of which he divided between his nine children and his wife. From the proceeds of his 25 acres, he has been able to build a permanent house, buy a vehicle and take his children to school.

“Farmers who follow best practices are making good money out of this crop,” he says.

From his 25 acres, he harvests between three and five tonnes every 10 days, which brings in about $3,500 a month at the current price that Oil Palm Uganda Ltd (OPUL) is paying for raw palm seed.

Uganda has achieved substitution of nearly nine percent of its annual vegetable oil imports and lifted thousands of smallholder farmers out of poverty, a decade and half after launching oil palm growing in the island district of Kalangala. Some 1,850 smallholder growers are earning regular incomes from the sale of oil palm seed to OPUL, a joint venture between Kenya-based Bidco Oil and global palm oil behemoth Wilmar International, the government’s private sector partner.

After registering success in Kalangala, the government now wants to replicate the project in other poverty-stricken communities in the Lake Victoria Basin. According to Connie Magomu Masaba, co-ordinator of the National Oil Palm Project, there are plans to develop new plantations in Buvuma, where 900 hectares of a planned 5,000ha plantation has been planted since January. Other areas are Mayuge, greater Masaka and Sango Bay in southern Uganda.

“The major social impact of oil palm on communities is not the amount of money it gives farmers but the regularity of income. With that, one is able to plan and save, which is not possible with many other crops,” said Ms Masaba.

Expanding the crop area is an imperative because under its agreement with OPUL, the government was supposed to make 40,000ha available for planting oil palm trees. So far, less than half has been provided. OPUL’s Damanik said Uganda will need 100,000ha under oil palm if it is to fully substitute its palm oil imports at the current consumption rates. He adds that such production can only be achieved through oil palm because of its higher yield of oil compared with other crops, which would require a lot more land.

David Balilonda, the general manager of Kalangala Oil Palm Growers Trust (KOPGT), said progress has been slow because of activism by international NGOs who accused the project of decimating natural forests and dispossessing poor people of their land. Mr Balilonda dismissed the charge, saying 70 percent of the project was developed on marginal land such as grasslands and rocky outcrops, which have now become productive.

The marginal land was allocated to OPUL because it involved higher capital costs to develop, which could not be managed by local residents. The other 30 percent is on privately-owned land whose owners cut down trees to open land to oil palm plantations. Land acquisition was also slow because owners had to be compensated, he added.

First conceived in the 1970s, oil palm growing in Uganda only gained traction after OPUL came on board in 2003, under a $100 million project sponsored by the International Fund for Agricultural Development IFAD. Uganda consumes 550,000 tonnes of vegetable oil annually.