Emergencies strike without warning and sometimes, they come with their in-laws to visit you. And that is the very situation my elder brother found himself in. You see, he is a married man and he is currently putting up his house back at our ancestral land.

This is a task he has been focused on ever since he was allocated his share of the inheritance -our family wants clear lines of succession- and he decided to really get into it and that is where he has been; that is his project.

But one thing he has realized is that he has to be there to actually supervise the work his local funds are doing because when the cat is away, the mice shall play. An example of this has been that whenever he is around to oversee what they are doing, work seems to go on seamlessly. But when he is back at work in Nairobi and he delegates work, it is done in such a sloppy way, he sometimes has to oversee it get redone.

And that is draining his time. He has only just finished doing the fence and then he realized he needs to hire either a foreman or site manager -from Nairobi. The last time we touched base, this was the point at which he had reached.

We recently had to touch base and he told me that he has had one particular time when he was deep into his budget for fixing the house when he found out that his wife needed money for their farming project.

Basically, they have been growing vegetables and keeping bees and the bees produced so much honey, the hives broke. And that was just before they were set to harvest their honey… Ontop of that their farmhand had neglected their shamba in favour of growing and focusing on his own crops. they had to deal with a double-loaded situation.

He realized that he can take out a Co-op Bank Flexi Cash Salary Advance to help him deal with the situation. His wife was stranded as her bank app wasn’t working and they do not have branches in the hinterland. And he was able to take care of things with such ease… Seriously, it was as simple as: 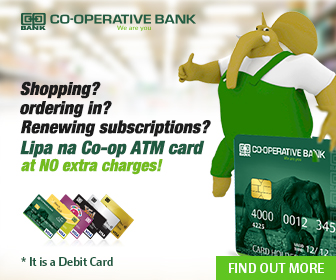 So what exactly are the features of the Flexi Cash Salary Advance?