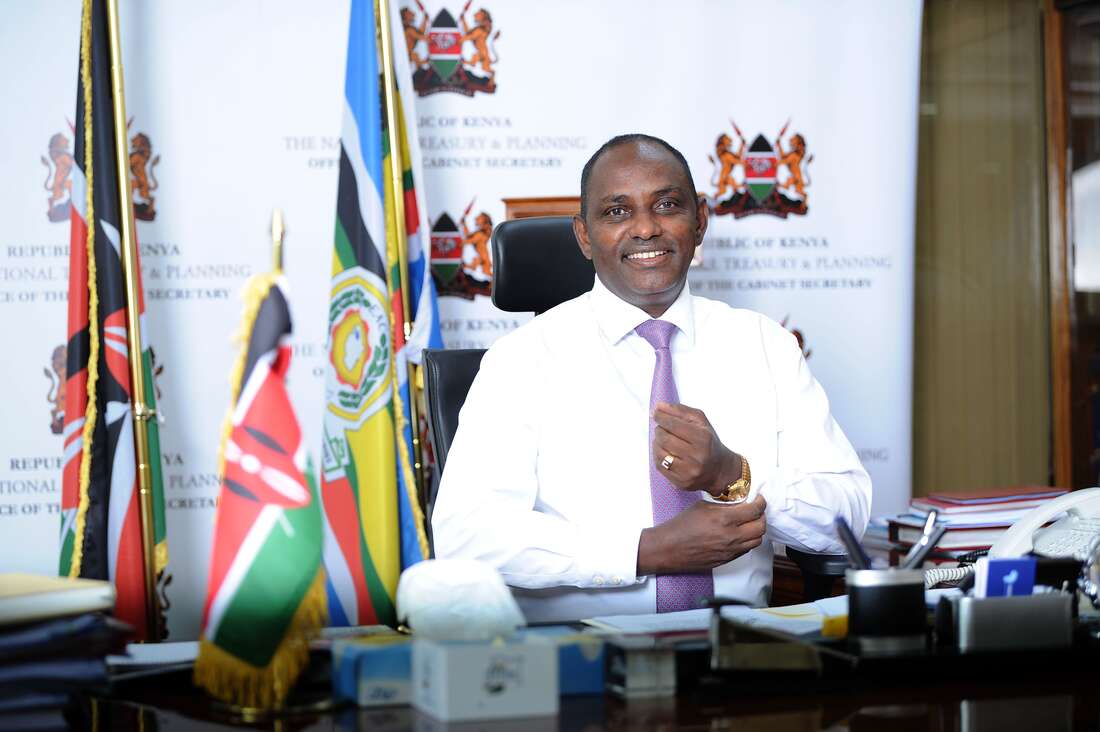 Mr Yatani will outline the strategy of raising an extra Sh210 billion in total revenue to fund President Uhuru Kenyatta’s final full-year budget when he presents the country’s expenditure plan to the National Assembly this afternoon.

The 2021-22 financial year’s budget is expected to cement the legacy of Mr Kenyatta’s 10 years in office in a tough economic setting clouded with depressed corporate and household earnings amid uncertainties arising from the Covid-19 pandemic.

Mr Yatani is walking a tight rope as he seeks to delicately balance between funding Mr Kenyatta’s capital-intensive legacy projects and squeezing more taxes from individuals and firms despite on-and-off disruptions in economic activity as dictated by the pandemic.

The Treasury is targeting to raise about Sh2.04 trillion in total revenue compared with Sh1.83 trillion estimates for the current year ending this month, according to the Budget and Appropriations Committee report.

Ordinary revenue streams for the Treasury – comprising taxes and non-tax streams such as court fines, charges for use of government services, rent, and forfeitures — are projected to hit Sh1.78 trillion, or 87.10 percent of the revenue projections.

This is Sh202 billion more compared with Sh1.57 trillion in the current fiscal year, with receipts for 10 months through April amounting to Sh1.27 trillion. Higher revenue forecast will put more pressure on the Kenya Revenue Authority (KRA) that has perennially struggled to meet the targets in a largely informal economy where tax compliance is low.

With little room for new taxation measures as captured in the Finance Bill 2021, Mr Yatani is largely banking on increased tax audits aimed at mitigating revenue leakages through concealment and under-declaration of earnings by companies and households to grow revenue.

The Treasury has, in the Budget Policy Statement (BPS) 2021 — which forms the basis for government expenditure — pledged to increase resource allocation to enhance determinations through alternative dispute resolution mechanism and fast-track conclusion of cases before the Tax Appeal Tribunal.

The KRA is expected to continue raiding tax cheats through its capability to feed financial transactions of individuals and businesses from third parties such as banks and utility providers into its Data Warehouse and Business Intelligence (DWBI) platforms at the Times Tower headquarters.

The taxman earlier in the year successfully lobbied the Finance and National Planning Committee of the National Assembly to allocate it additional funds to recruit about 2,000 officers to bolster its pursuit of high-net-worth tax cheats. It is not clear whether or not the Treasury allocated the requested funds.

KRA commissioner-general Githii Mburu has further said the taxman will seek to increase participation by the public in reporting tax cheats and its staff who abet tax evasion and bribery by rolling out a web-based anonymous reporting system, a platform it has been trying to install since 2013.

The taxman has been relying on walk-ins or e-mails and telephone calls made through KRA’s Complaints and Information Centre for tips — a technique which has had limited success partly because it requires informants to submit personal details.

To further expand the tax bracket, the KRA has extended a partial tax amnesty to businesses and individuals who have tax arrears dating five years to pay up without incurring accumulated interest and penalties.

The Finance Bill has largely focused on streamlining the tax amendments introduced this fiscal year such as digital service tax — which yielded Sh252 million in February and March 2021 and is projected to rake in Sh1.5 billion next fiscal year.

Tax experts said the tax proposals, including the introduction of VAT on basic goods such as bread and some medicaments, were likely to yield Sh40 billion at most.

“I foresee an amendment to the tax laws within the 2021/22 fiscal year because the Finance Bill is not going to yield much,” said Francis Kamau, lead tax partner at audit and consultancy EY East Africa. The amendment, he added, should focus on under-taxed areas such as real estate where the Treasury could look at, increasing capital gains tax on land transactions and removing exemptions under Stamp Duty Act.