Sherlyne Anyango has now decided to take her twerking business to international levels. The curvy video vixen moved to the States to make her business strive, saying that it’s easier for her to hustle their. Maybe Americans are willing to splash more money on what her momma gave her.

Following ‘The American Dream’ has forced Sherlyne to leave her bae Obinna behind. And according to her, breaking up with Obinna was inevitable. She doesn’t believe in long distance relationships. Obinna was forced to accept the harsh reality and wrote to Sherlyne yesterday saying;

I’m a single boy again now😪😱!! Now with the standards you set who will fit in🤷🏿 who will fill your shoes??But Si Ni Life… But for now Kill Them with your AWESOMENESS and SECURE THE BAG!!! Don’t let nobody tell you otherwise. Plus there will always be space for you in my Heart and Kidney🙊🙈🙏🏿.”

Sherlyne Anyango has now written back to her bae after receiving the message. She wrote on her Insta stories saying; 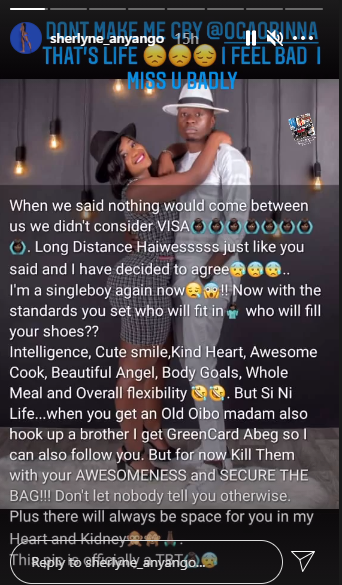 Maybe they should just stick to a long-distance relationship. Obinna should afford to visit Sherlyne once in a while, or vice versa.