New Bae? Sherlyne Anyango Gets Naughty With Mzungu In The States (Video)

After declaring that long distance relationships aren’t for her, Sherlyne Anyango might have bagged herself a new mzungu boyfriend. It’s barely days since she left the country to go to the States to ‘hustle’. According to her, it’s easier to hustle in the States with her twerking talent. 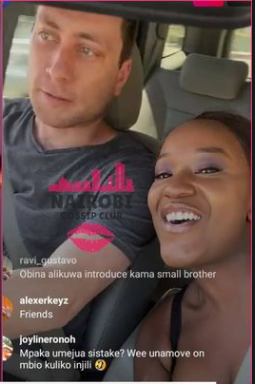 Well, she moved on quickly! This was the reaction of most of her fans after Sherlyne went live with her new catch. Most people were surprised by how fast she possibly got a boyfriend. But she hasn’t made it clear.

While this might seem unfair to her Kenyan bae, Oga Obinna, it was a mutual agreement between them to dissolve their relationship due to the distance between them.

”I’m a single boy again now😪😱!! Now with the standards you set who will fit in🤷🏿 who will fill your shoes??But Si Ni Life… But for now Kill Them with your AWESOMENESS and SECURE THE BAG!!! Don’t let nobody tell you otherwise. Plus there will always be space for you in my Heart and Kidney🙊🙈🙏🏿.”

In line to this, Sherlyne had also declared how much she misses Obinna and wrote back to him;

Well, turns out she won’t be missing him any more after getting a new catch. Obinna has not yet responded to Sherlyne’s video posted on her Insta stories. I bet he’s not happy seeing her with another man.

Below is the video;

BCCI: The bank ‘that would bribe God’