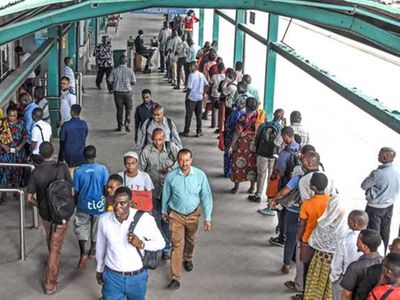 Tanzania announced that it will start releasing Covid-19 data amid pressure from the UN and Bretton Woods institutions to do so as a precondition for lending.

“Soon, the government will officially announce measures on how to address the Covid-19 pandemic in Tanzania,” government spokesman Gerson Msigwa told The EastAfrican.

The assurance came after the International Monetary Fund (IMF) on June 9 pushed Dodoma to start publicising Covid-19 infections and measures, with a threat to withhold a $571 million loan.

“In order to justify emergency financing in the context of the pandemic, you need to publish relevant public-health data. Publication of such data would be a precondition moving ahead,” said IMF’s resident representative in Tanzania Jens Reinke.

However, Tanzania had already moved forward with plans to deal with the pandemic, after a task force formed by President Samia Suluhu and chaired by Said Aboud handed in a Covid impact mitigation plan.

“The government has made arrangements on how to address the Covid-19 pandemic. When the government states its official position, it will include all that the IMF is asking for,” said Mr Msigwa.

And on Thursday during the presentation of the 2021/22 budget, Finance Minister Mwigulu Nchemba announced that the government is in negotiations with the IMF to secure $571 million to mitigate the economic and social effects of the pandemic.

“The government intends to direct the funds towards bolstering official foreign reserves, improve expenditure in health and water sectors as well as boost tourism services,” he said.

Minister Nchemba said President Samia had held a virtual meeting with IMF Executive Director Kristalina Georgieva to strengthen economic and social relations, including strategies to address the impact of Covid-19.

Statistics show that Tanzania’s economic growth was highly affected by the global pandemic with the country’s economic growth rate estimated to grow at an average of 4.8 percent this year from prior estimation of 6.9 percent rate.

Now, the Aboud committee’s report states that the country has been hit by two waves of the novel virus.

Recently, Tanzania allowed foreign missions and companies to access vaccines for their staff, offering a glimmer of hope in dealing with the global pandemic in a country once cited for Covid denialism.

The threat by the IMF came in the wake of a ravaged economy due to the effects of the pandemic, which have weakened near-term macroeconomic prospects for the country.

Dodoma first asked the IMF for a loan under its Rapid Credit Facility in March 2020 but the negotiations never progressed, and the government said in May that it had revived the request. Early talks over the RCF request have started, according to Mr Reinke.

Tanzania could access over $570 million, given its current IMF quota, or double that if the lender’s board approves a proposed new general allocation of Special Drawing Rights to help countries deal with the consequences of the pandemic. But, the loan has set conditions, this time Covid-19 data, which were last issued in May 2020, during the late John Magufuli’s presidency.

The IMF Executive Board has approved emergency financing to 80 countries, including Tanzania, under its two instruments, the RCF and Rapid Financing Instrument (RFI). These facilities allow the Fund to provide emergency assistance without the need for a full-fledged programme.

The IMF has extended debt service relief through the Catastrophe Containment and Relief Trust (CCRT) to 29 of its poorest and most vulnerable member countries, covering debt falling due for the period between April 2020 and mid-October 2021.

This debt relief helps the benefiting countries to channel more of their financial resources to emergency medical and other relief efforts as they combat Covid-19.

Last year, Tanzania received $25.7 million under the CCRT to cover debt service and fund measures to fight the pandemic.

Now, the Prof Aboud-led team recommended the resumption of the publication of official figures on the spread of the disease. While appointing the team, President Samia said the country needs a clear understanding of where it stands in the Covid-19 fight.

“We can’t isolate ourselves as if we are an island but, also, we can’t accept everything brought to us,” said President Samia. “Tanzania needs to have its own understanding of where we stand on the issue of Covid-19.”

The committee also advocated for vaccination of frontline workers and vulnerable people, on voluntary basis. It also recommended that the government join the Covax Facility for easy access to vaccines.