Bahati has been on the limelight for the past few days due to a couple of things. To begin with, his diss track came out as peculiar as he wasn’t expected to mock artists. His video also culminated to KFCB boss Ezekiel Mutua pulling out of financial support to the singer. However, just as his name suggests, ‘Bahati’ was lucky to get artists and celebrities back him up and come to his rescue.

One of them was Hon Alinur, who offered to give him the Ksh 200K, and Eric Omondi, who splashed a thousand shilling notes on Bahati on the day of releasing his long-awaited album.

Talking of album, Bahati’s latest track dubbed ‘Pete Yangu’ featuring Nadia Mukami has broken the record in the Kenyan music industry. The ‘hour mark’ has proved to be very essential when it comes to music viewership on YouTube.

The number of views a song gets after an hour determines how good or bad the song will perform. And we’ve seen this on numerous occasions.

Anyway, Bahati’s song had surpassed 100K views in less than an hour; leading to a new record in the country.  Tanzanian musicians like Diamond, Rayvanny and Harmonize have also achieved this. 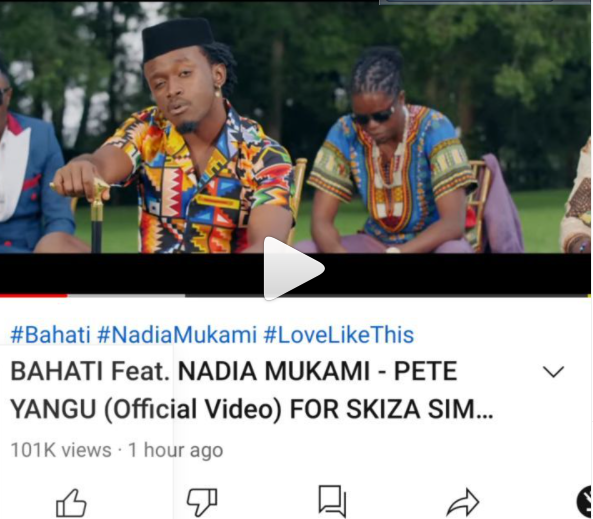 The video now stands at 393K views after 21 hours.

You can watch it below;

Many buildings to come down in dual road plan