City tycoon Jimnah Mbaru has revived talks of a potential return to the tough world of politics after nearly ten years on the sidelines.

While engaging his supporters via social media on Wednesday, 16th February 2022, the affluent Investment Banker hinted at running for an elective post in the upcoming August elections, but only if a majority approve of this decision.

Through his often explosive Twitter account, Mbaru who is one of Kenya’s richest men, asked for the opinion of his followers on whether or not to mount a second challenge for the Nairobi gubenitorial seat following his first failed attempt in 2013.

According to the billionaire maverick behind leading investment bank Dyer & Blair, many of his close friends, associates as well as members of community groups have been urging him to declare himself as a candidate for the elusive position formerly occupied by ousted Governor Mike Mbuvi Sonko.

“Several people and groups have called urging me to offer myself as a candidate for the Governor of Nairobi during the forthcoming August elections,” he wrote.

“I would like to know what you think. Please give your genuine views whether they are offensive or not,” he added. 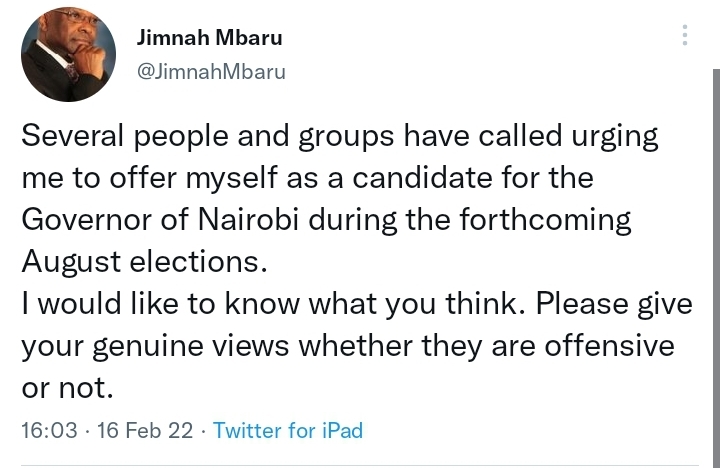 Among those who show immediate support for his yet-to-be-announced bid was current Makueni Governor, Professor Kivutha Kibwana.

In a tweet published moments after Mbaru’s remarks, Kibwana sensationally declared that if he was a registered Nairobi voter, he would not hesitate to cast the balot for the 68-year-old.

“If I had a vote in Nairobi, I would vote for Jimnah Mbaru without hesitation. He is even material for higher office,” he wrote in part of the post. 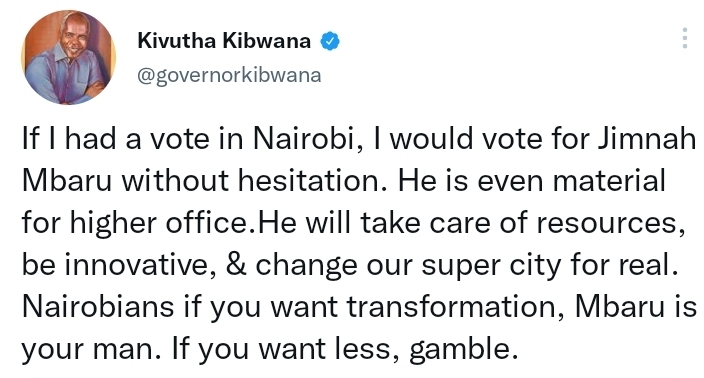 While most of Mbaru’s fellow billionaires rarely offer any insight into their thoughts and lives away from business, he doesn’t shy away from sparking debates, offering criticism or sharing his grand ideas to transform Kenya and Nairobi’s economy.

His platform of choice is Twitter, where his bio reads: “Investment Banker. Sometimes I tweet to provoke debates. You don’t have to believe everything I tweet.”

His favorite topics – Nairobi, markets, Kenya’s economy and politics. One thing that is clearly dear to him is his vision for Nairobi to become “Africa’s Business Capital”. He has referenced the vision countless times on his page over the years.

Reflecting on his failed 2013 gubernatorial bid, the holder of a BSc. Commerce and an MBA, wrote in October 2020 that he fully accepted the tough to take rejection by the people of Nairobi.

“This interview was held on 18th January 2013. I never made it. People of Nairobi rejected me overwhelmingly,” he opined at the time.

Kenyan envoy in DRC to be fired once Ruto takes power, Ahmednasir declares