KDF soldier caught pants down on a Minor

Kenya Defence Forces(KDF) have been facing multiple accusations of committing atrocities to women and mostly children for the past recent years.
In 2012 for insistence, the KDF was forced to tweet and dispute claims of massive civilian killings, scorched earth policy and rape in Somalia.
https://twitter.com/kdfinfo/status/271287628727451649?s=20&t=fiDcEhgL2dh3mwMEQof0nw
Last year, A kdf officer was also charged after the court found him guilty of defiling a minor while going to school in a series of never-ending cases of sexual harassment against the disciplined forces. 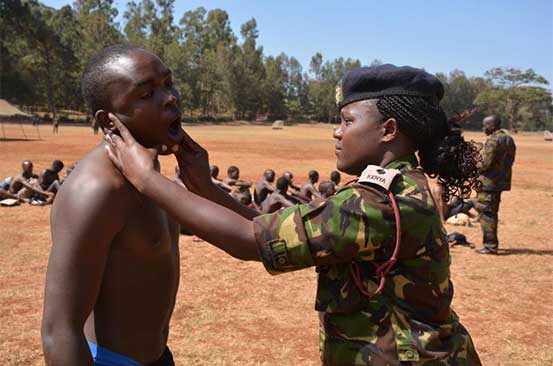 In another news, Detectives yesterday afternoon arrested a Kenya Defence Forces (KDF) soldier for defiling a 12-year-old minor in Langas, Uasin Gishu county. The KDF Private, Elly Kipkoech, based at 9KA, Second Brigade, is currently a guest of the state at Langas Police Station, for taking the innocence of a 12-year-old girl who is a class seven pupil at a local public primary school, in Eldoret town.
The minor who went home at around 7:30pm last night, told her worried mother that she had reported home late because she had been held hostage by a man who took advantage of her. Upon further interrogation, the mother noticed blood stains on her daughter’s undergarments and pleaded with her to reveal the identity of the perpetrator. Upon filing her report, Eldoret-based detectives employed digital and cyber forensics to trace the suspect, who had gone into hiding at Green Park estate and placed him behind bars.
Private Elly Kipkoech, is currently being processed for arraignment in accordance to military parlance, after being positively identified by the victim.
The two have since undergone medical tests at the Moi Teaching and Referral Hospital. The Directorate of Criminal Investigations’ Anti Human Trafficking and Child Protection Unit, remains on high alert following an increase in sexual offences and commits to bring every perpetrator of the vice to book, regardless of the positions they hold in society.