KRA bends over to Keroche’s claims

After signing an agreement with the Kenya Revenue Authority (KRA) to pay Sh957 million in tax arrears in the next twenty four months, Tabitha Karanja‘s Keroche Breweries is set to reopen.

The tax arrangement was struck on Wednesday, only days after the company’s Managing Director Tabitha Karanja went public with the company’s woes.

Dear Kenyans, the Kenya Revenue Authority (KRA) @KRACare has issued a statement to reply to our grievances that we had raised about Keroche Breweries @keroche_ltd. It is with humility that I seek your indulgence to take this opportunity to tell my side of the story. The payment would be made as back taxes, allowing the Naivasha-based brewer to reopen after warning that being closed would result in the layoff of 250 workers and the loss of 2 million liters of beer in fermentation tanks worth Shs512 million.

A statement shared by KRA indicated that the two firms settled on an agreement that will see Keroche settle an undisputed tax amount of  Sh957 million over a  period of two years.

“The addendum agreement which flows from the earlier Alternative Dispute Resolution process will see the rest of the taxes owing from Keroche dealt with as was agreed between the two parties in the ADR already signed,” KRA said.

The signed addendum agreement will also see KRA lift agency notices issued to thirty-six banks. KRA had disclosed that the troubled Naivasha-based Keroche Breweries owes it Sh22.79 billion in unpaid taxes in response to Karanja’s statement that it was being sabotaged by the agency. 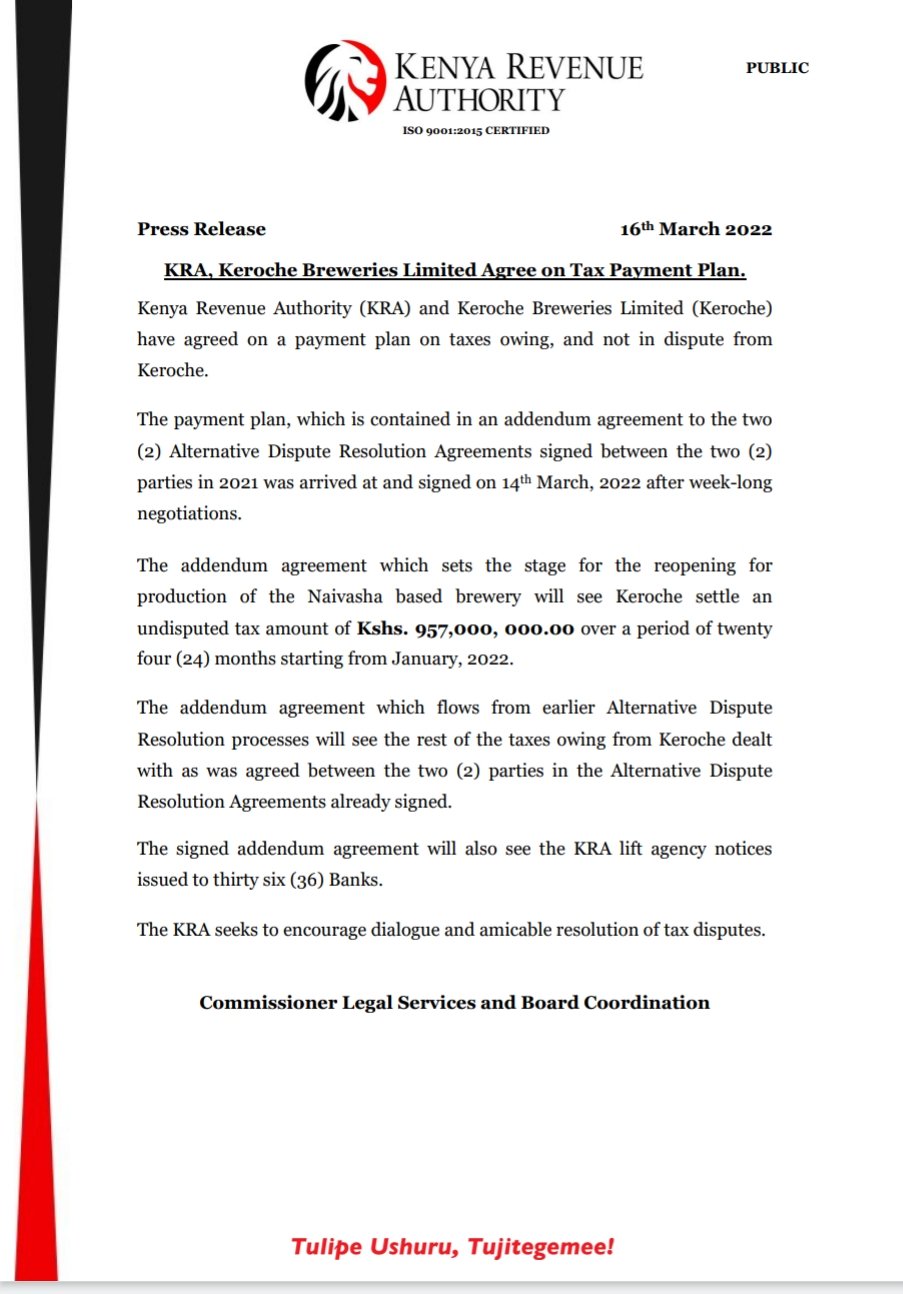 According to KRA, the taxpayer (Keroche) has been collecting taxes from consumers but not remitting the same to KRA, it disclosed that Naivasha-based Keroche Breweries owes it Sh22.79billion in unpaid taxes.

“By allowing any taxpayer to continue collecting taxes and not remitting the same, KRA will not be executing her mandate of ensuring that taxes that fall due are remitted in a timely manner and that all taxpayers remit their fair share of taxes,” the taxman said in a statement.

Karanja had petitioned President Uhuru Kenyatta to intercede, claiming that he had been unable to meet with the KRA commissioner general. She said that they (Keroche) owe 322 million in arrears dating back to February 2021, as well as 500,000 million, rather than the outstanding 21 billion given by KRA.

“However, the 3.9 billion stated by KRA which is a combination of 1.1 billion from 2006 and 2.9 billion from 2012-2015  is hypothetical as Keroche neither charged nor collected the taxes due to ambiguity of the tax classification codes applied by KRA at the time,” she said.

Yesterday, DP Ruto at the UDA national delegates conference expressed his dissatisfaction how KRA has been weaponized to fight local businesses.

“Today, it’s not Tabitha Karanja‘s (Keroche) business, but also the Boda Boda business has been weaponized by those who hold power in Kenya. We will not bow to you and worship you, we worship the living God in heaven,” DP Ruto said

.@WilliamsRuto: They have weaponized state institutions, they have weaponized the DCI, EACC and KRA to run political errands, to dismantle businesses of people who do not worship them. This country will change.#K24Siasa pic.twitter.com/2WmkWx3ynq