Now that he’s there, Kenyans couldn’t help but laugh at his first speech in which Uhuru said he has relatives from the country.

“My wife’s brother’s mother is from Jamaica,” Uhuru stated during his speech. 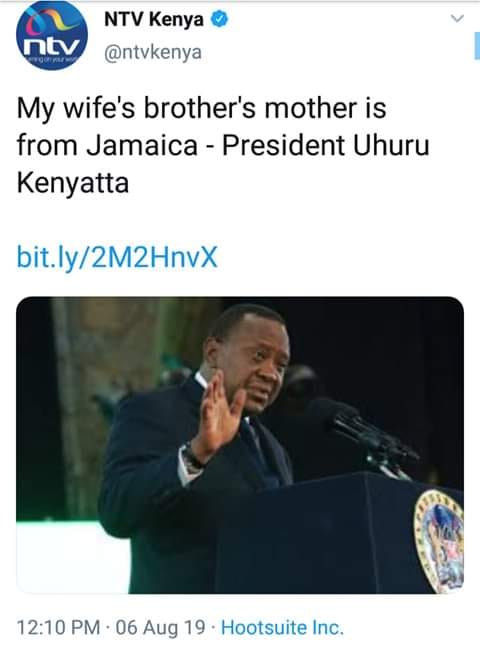 Kenyans wondered why the president did not refer to his relative as his mother-in-law since the said person was his wife’s brother’s mother.

“He meant that his father-in-law was polygamous and one of his wives was from Jamaica. The Jamaican wife, therefore, had a son who’s the half-brother to his wife. That is, Uhuru is talking about his stepmother-in-law,” Godfrey Nderitu commented.

Hillary Kihuga Even my grandmother’s last born cousin on her dad’s side who was adopted by her dad’s mom was a first cousin to a very well known aunty to the first born of Haile Selassie’s close babysitter. Thus making me a Selassie too. I and I ady Rasta. Ye know wuh mi seh?

Nelius Kiarii Kiarii This kind of English… I ain’t getting the point.. Who is from Jamaica.. Feeling confused with my crew..

Wuod Caro Kod Aguko Hehehe amepewa fresh from the farm! But ata sisi tuko na ukoo huko coz Jah cure is close friend of my uncle who hails in Jamaica and go to the same church with the brother to my aunt.