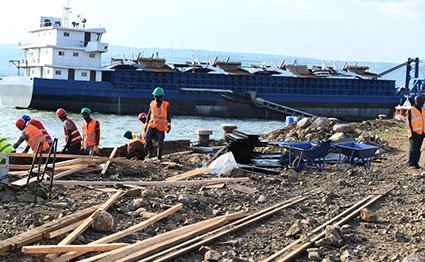 The planned opening of the refurbished Kisumu Port was yesterday abruptly cancelled with barely a day to the event.

President Uhuru Kenyatta was today expected to lead five other East African presidents in launching the operationalisation of the port, which has been under renovation for the past eight months at a cost of Sh3 billion.
Yesterday, a press conference called by the port launch committee chaired by Governor Anyang’ Nyong’o failed to take place.
State House said it had received communication from the committee on the postponement, but could not provide reasons for the decision.

“The event was being organised by the port launch committee and they informed us that the event had been postponed. It was not a State House event. It could be because the President has been out of the country and they wanted to give him time to plan his diary,” said State House spokesperson Kanze Dena.

Kenyan Bulletin has confirmed that the biggest event, was supposed to be Raila’s political boost was postponed due to delays in completing works at the port.

The confusion was heightened by social media users who claimed there were plans to disrupt today’s event due to the ongoing demolitions of nearly 3,000 small and medium businesses.

Committee Secretary Aloice Ager told Kenyan Bulettin that members needed to consult further before a final statement was issued to the press. Mr Ager, however, declined to comment on allegations that the event had been postponed.

“I am not the one to talk about that. Let the team consult and we will call you back to give you clear information about the event.” Ager said

The Regional Commissioner James Kianda, who was also part of the organising committee, was available on phone to comment.

“We will update at the appropriate time,” Mr Kianda responded to a text message following an enquiry about the event.
The event was cancelled even as details from a committee meeting held on Tuesday showed that plans for the launch were complete.

According to minutes seen by the Kenyan Bulletin, the venue of the event was already identified and arrangements made for heightened security.

Tight security was also expected within and around the airport, with access to the airside area restricted.
With the main event scheduled for the port premises, the public was to follow the event from Jomo Kenyatta Sports Ground where a big screen was to be installed for spectators to follow the function.
The meeting proposed a public rally to be addressed by the guests at Mamboleo showground after the function.