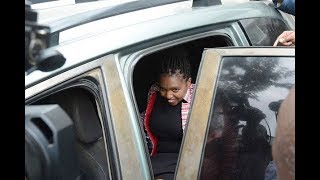 Owners of alcohol giant Keroche Industries Ltd Tabitha Karanja and her husband Joseph Karanja have been arrested in Naivasha after the brewer was accused of Sh14 billion tax evasion.

They were held after the Director of Public Prosecutions Noordin Haji Wednesday ordered their detention.

Detectives spent the day at the brewery’s entrance on Wednesday waiting to effect the order but the gates remained locked.

Ms Karanja is believed to have remained holed up in her office for more than 14 hours.

Speaking to the Nation on phone, Ms Karanja, who is also the chief executive, said the order of her arrest took her by surprise and that she only learnt about it through social media.

Sounding exhausted, she admitted having spent the night in the office as detectives from the Directorate of Criminal Investigations (DCI) kept vigil outside the factory.

“I have never been summoned by any of the agencies over the issue and I am surprised and shaken by the turn of events,” she told the Nation.

Mr Haji ordered the two to be presented in court to answer to 10 counts of tax fraud committed between January 2015 and June 2019.

Following the order, she released a statement in which she accused the DPP of “not acting in good faith by prosecuting a matter that was still under determination, thus undermining an institution obligated to handle such matters.”

She termed the tax bill slapped on the firm by the Kenya Revenue Authority, that has been engaged in long-running battles with the brewery, as being punitive.

Nakuru Governor lee Kinyanjui waded into the issue taking a swipe at the taxman and saying that there was need to protect local businesses.

“We must encourage a tax system that enhances compliance while appreciating the economic realities that businesses operate in. Ignoring this business reality, will lead to 100 percent compliance but leave half the industries closed,” he said on Wednesday.

He stated the Naivasha-based company was a major employer in the county and the country.

“While there may be tax matters that require redress, it would be an act of utmost betrayal to Kenyans who have built their businesses over the years, to be reduced to fugitives,” added Mr Kinyanjui.

He expressed fears that the brewery’s more than 500 employees and thousands others who are indirect beneficiaries may lose their jobs if the matter was not handled amicably.

“We must treat the owners of capital with caution otherwise we shall be staring at major job losses,” Mr Kinyanjui.

Founded in 2009 and wholly owned by the Karanja family, Keroche started by making spirits and wines before diversifying into beer. It was the first ever Kenyan-owned company to brew beer which for a long time was the preserve of East African Breweries Limited (EABL).

As a result, Keroche’s Summit Lager and Summit Malt beers have for the past few years competed with products by Diageo’s East African Breweries, which enjoys a commanding lead with it popular Tusker brand.

The company has, however, in the past been engaged in long-running battles with KRA, over Sh1.3 billion backdated tax bills, which issued a shutdown order but the brewer obtained a court order stopping the closure.

In 2017, the Court of Appeal ruled, a decade-long Sh1.1 billion tax battle between the firm and KRA, in favour of the brewer.

The court ruled that the tax bill mainly related to most of the brewer’s products already in the market which Keroche had not factored in this development.

In 2015, when Keroche Breweries was shut down for days for alleged non-compliance on taxation, KRA demanded a backdated duty of about Sh1 billion for the ready to drink Vienna Ice vodka

The matter ended up in court.