Things are tough for Kirinyaga Governor Anne Waiguru and these are practical examples of the negative consequences of voting with our stomachs, egos, pockets and tribes. 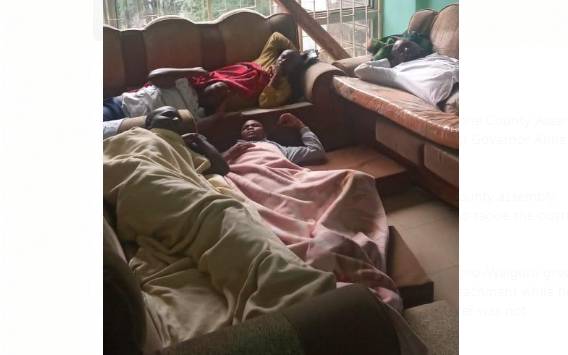 Yesternight, it has been revealed by Blogger Dennis Itumbi that some Members County Assembly in Kirinyaga County spent their night at the Assembly as they prepared to debate an impeachment motion against Governor Anne Waiguru.

Yesterday, there was confusion at the Assembly as the pro-Waiguru group insisted that there is a valid court order stopping the impeachment while her opponents insisted that the orders had elapsed as the matter was not prosecuted.

“We are determined to play our role as the representatives of the people. We do not want undue influence from outsiders that is why we decided that we will spend our night here. We have even switched off our mobile phones,” said one of the MCAs.

Mutira MCA David Kinyua filed the motion of impeachment in April accusing Waiguru of gross violation of the Constitution, abuse of office and gross misconduct.

Last Month, Kinyuas home was attacked by unknown assailants a few days that were baying for his blood, and other MCA involved in the impeachment motion received death threats.

Kinyua also accused Waiguru of gross violation of the Constitution by failing to deliver the annual State of the County address to the County Assembly.

“The governor has deliberately refused, failed and/or neglected to deliver the same for the financial year 2018- 2019 which failure amounts to a gross violation of the Constitution and the County Government Act,” said Kinyua.

The pro-impeachment MCAs said they have the support of 24 out of 33 members of the county assembly.

There was confusion at the assembly as the order paper for the business to be transacted today had not been circulated.

Here is a Presser from the embattled Kirinyaga governor Anne Waiguru.

PRESS STATEMENT BY H.E. GOVERNOR ANNE WAIGURU ON THE ILLEGAL TABLING OF THE IMPEACHMENT MOTION BY KIRINYAGA COUNTY ASSEMBLY
9THJUNE, 2020

This morning the Kirinyaga County Assembly has placed on its Order Paper the notice of the ill-informed and ill-timed impeachment motion against me. As I have stated before, the issues raised in the motion are baseless and a waste of valuable time that would be better spent handling the serious issues impacting the County, including the Corona crisis. Their intent is merely to bully me to achieve nefarious and personalized political objectives.

On the basis of the above and other factors, I sought and obtained a clear and unequivocal Court Order from the High Court stopping any proceedings by the Assembly on the impeachment motion until the numerous issues that we raised with the Court were determined. These matters remain undetermined and the injunction remains in place.

For some inexplicable reason, the members pushing this motion to believe, or have been led to believe, that they are above the law. They believe they are not bound by Court Orders. Their allegiance seems to be to a master pulling and pushing the levers from outside the Assembly, and not to the rule of law.

If the Assembly does proceed in violation of the subsisting Court Orders, I shall seek such orders for contempt against the Speaker and all participating members as are available under the Law.

In the meantime, I reiterate once again. I shall not be bullied. My single and unceasing interest is to serve the people who elected me. All else will be vindicated by the Law, the Truth and Justice.