Feisal Abdallah Bada was elected the next Member of Parliament for Msambweni constituency in Kwale County in the by-election that recorded one of the lowest voter turnouts at 39.5 percent

Feisal Badar who in the polls was massively-backed by Deputy President William Ruto, garnered 15,251 votes compared to Boga who was ODM’s favourite got 10,444 votes.

The other two candidates, Sharlet Akinyi and Mansury Abdulrahman got less than 100 votes each.

IEBC’s commissionar declared Feisal  Badar as the next MP of Msambweni in the heavily-contested by-election. 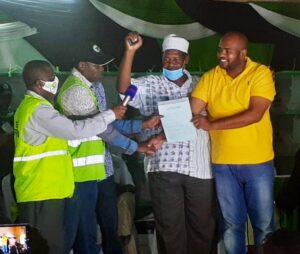 The DP had mobilized his supporters to rally behind Feisal after his parent party Jubilee said they were not going to field a candidate in the by-election as a way of demonstrating goodwill to ODM. Raila Odinga-led party political machinery in the Coast region led by Governors Ali Hassan Joho of Mombasa and his Kilifi Counterpart Amason Kingi had hit the campaign trail to drum up support for their flag bearer Omari Boga.

At some point, the campaigns became too heated that the two rival camps accused each other of plans to rig the poll.

Msambweni residents finally have a representative at the August House, nearly nine months after the seat was left vacant following the death of former lawmaker Suleiman Dori back in March.