We need to talk about quack Kenyan doctors in private hospitals like Coptic, Nairobi, Aga Khan, Avenue, Gertrudes, and others around the country.

So many Kenyans are suffering at the hands of these quacks who are cashing in from unwanted medical operations.

The quacks, most who are allegedly Indians who are working without a permit in Kenya are deliberately misdiagnosing patients to balloon the hospital bills for innocent Kenyans, especially those with medical insurance.

We should also expose these medical insurance companies who are remiss of the duties of these quack Doctors.

“A patient in need of medical assistance is allowed to spend only ksh2500 per week and forced to come back after one week again. What if it is an emergency?” A Kenyan shared on Twitter.

“I have noticed that if you take a family or relative to a Public hospital there will be like 3 totally unrelated procedures you will be forced to pay till one real Doctor comes and cancels all other ‘doctors’ tests and prescriptions,” another Kenyan shared on Twitter.

“I had surgery recently in one of the hospitals. The doctor was superb. But, my discharge was almost immediately even though I was still feeling terrible simply because my insurer did not approve “enough” thousands as they had demanded. This topic is a hot potato in Kenya,” another affected Kenyan shared on Twitter.

“Worst Oncology Department. They frame a good picture then charge you with a fortune, after that they hung you up dry. My father got surgery for oral cancer in Jan 2019 now in April 2019 the asked us to go another hospital because the don’t want to take his responsibility of the wrong they have done to my father. The condition is worst now. They did not remove cancer properly.” Another victim shared.

“Kindly note that most of Kenyan doctors are quacks, just like engineers. Many are parallel students where money was their only qualification. You got to these “big” hospitals with a fever and they’re quick to say COVID, even when it could be Malaria, Dengue Fever, HPylori, etc.” Another Kenyan shared online.

“My dad last week had breathing problems. I spent 70k at nairobi west hospital for my dads bill and haku improve. I took him to Onother hospital akaongwezwa 2pints of blood .cost 10k and he is now very Okey.”

In America, one needs to have a first degree before doing a second medical degree, and then 7 years of residency. In Kenya, this process can take just 6 years.

If left unchecked, doctors, teachers & the Boda Boda fraternity will run wild, they all have developed a peculiar sense of entitlement, who else asks for a pay rise every year?

In 2018, James Mugo Wa Wairimu, the fake doctor who operated a clinic in Nairobi without a licence was sentenced.

The quack doctor was jailed for three years after a court found him guilty of operating a clinic without a license from the Pharmacy and Poisons Board.

Nairobi Senior Resident Magistrate Martha Nanzushi, however, gave him an option of paying a Sh1.4million fine to be set free. 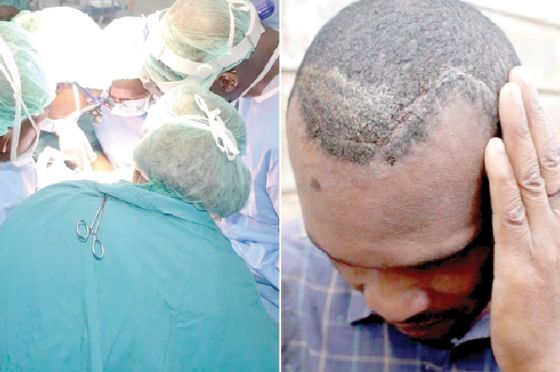 In March 2018, a top KNH neurosurgeon was suspended after he opened the head of the wrong patient in one of the worst cases of medical malpractice.

This is how the nightmare unfolded. Two men were wheeled into KNH unconscious. One needed urgent head surgery to remove a blood clot in his brain while the other required nursing and medication to heal a trauma swelling in his head.

Unfortunately, a horror mix-up of identification tags saw the wrong man wheeled into the theatre and his skull yanked open.

Doctors did not realise the mistake until hours into the surgery when they discovered there was no blood clot in the brain of the man sprawled on the operating table.

KNH chief executive said the hospital regretted the incident. But the Doctors were paid for doing the wrong work.

So, why is that most senior doctors in Kenya are Asians? Does this mean that there are so many Indian quacks running private hospitals in Kenya?

Medical tourism is one of the biggest revenue avenues for the Indian economy. While in the real sense, the bigger local population is unable to afford the healthcare.

Indian private healthcare has positioned and sold to the world as the best but is it really as it seems?

“They sell false hopes to Kenyans, we have best doctors here but a false narrative has been constantly sold to us that Kenyan doctors are incompetent, this is a marketing strategy, India’s healthcare is not as good as painted.”

What’s untold is the fact that India only sells their snake oil in five countries particularly, Kenya, Nigeria, Tanzania, Uganda and Rwanda.

Why is it that there are no senior Indian doctors countries like South Africa, Egypt or Tunisia?

It is simple, the only reason is that those countries have working healthcare systems.