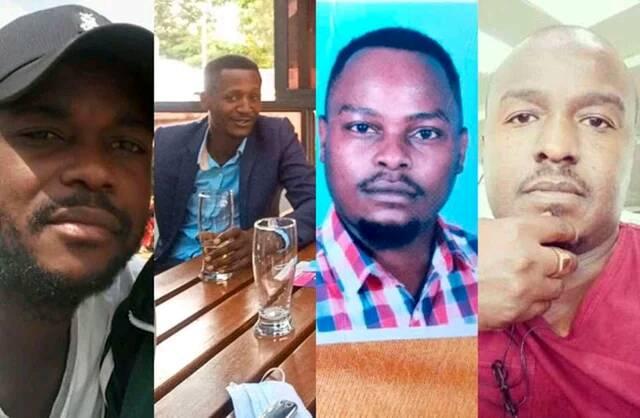 Detectives from the Directorate of Criminal Investigations (DCI) are still piecing up evidence to solve the puzzling abduction and murder of four men who went missing after sharing lunch in Kitengela a fortnight ago.

The bodies of Elijah Obuong, 35, and Benjamin Imbayi were both retrieved by police from different locations on Thursday, 29 April and identified by family at two morgues.

Obuong’s body was recovered while stuffed in a sack near Mathioya river in Muranga while the body of 30yr old Imbayi was positively identified at General Kago Funeral Home in Thika.

While 36yr old Brian Oduor and Jack Anyango Ochieng are still missing, officers drawn from the Directorate of Criminal Investigations have linked the four men to criminal operations and run ins with rogue police officers.

For instance, Imbayi whose body was discovered at General Kago Funeral Home was part of a seven member gang according to police. Sleuths investigating the case further revealed that Imbayi was linked to the robbery at a car yard on on Ngong Road.

Sources yesterday told our sister publication, People Daily that security agencies were concerned about the involvement of some of the members of this group that included a former convict who had served an eight-year jail term.

The gang leader was identified Brian Oduor, popularly known as “Kompe”. One of the missing men, Amache Imbai, had cases pending before Mavoko and Kibera Law Courts.

Imbai had also been arrested last year after a gang broke into a vehicle at a car yard on Ngong road in Nairobi and stole cash.

According to the Directorate of Criminal Investigations, Imbai was part of a notorious gang that on January 11, 2020 stole Sh900,000 from a vehicle yard in Ngong.

The seven-man gang was arrested on January 14, barely three days later, by Kilimani DCI detectives who also recovered three vehicles believed to have been used during the crime.

The gang had trailed the victim from Kenya Commercial Bank Buruburu to the yard where he intended to purchase a car.

The victim parked the car, safely locked it and left the money inside as he was being shown around.

“The gangsters, who posed as customers, parked their vehicle next to the victim’s car before breaking in and disappearing with the money, but were caught on CCTV cameras,” the DCI said.

According to police, the four arrived at Club Enkare in the afternoon, ordered a few drinks and were last seen leaving the entertainment place around 3pm while walking towards the facility’s parking lot, where they left their vehicle – a white Toyota Mark X of registration number KCQ 715C.

Their subsequent movements were not captured on video since Club Enkare had not installed CCTV cameras.

After days of being unreachable on the phone, the missing persons’ respective family members filed distress reports.