Worry as man found dead, vehicle burnt to ashes in Rongai after he was sent to drop boss’ wife 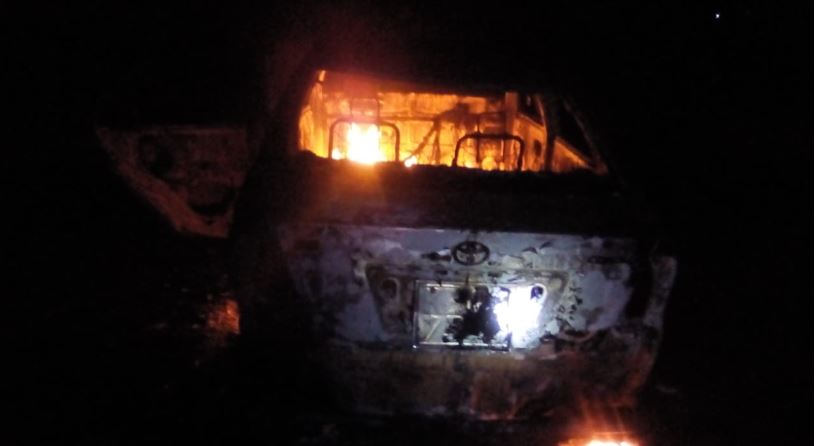 Detectives are investigating an incident where a man identified as Eric Okari Mwambora was found murdered on Tuesday at Ong’ata Rongai and the vehicle he had discovered burnt into ashes in lower Oloontepes village, near Tuala shopping centre.

Okari was last seen alive on Sunday when the vehicle owner identified as Nashon Mureki allegedly sent to drop his wife who works as a tutor in Kitui County.

According to Nahashon, he was notified by an unknown person that his vehicle was spotted burnt at Tuala before he confirmed that indeed it was his vehicle.

On the same day, police had been notified of a body found lying dead along RIMPA road which later turned out to be that of Okari.

Okari who is a Ngong-based mechanic and driver is said to have last spoken to Mureki on Sunday at around 10 pm when he told him he had been arrested at a roadblock.

According to Mureki, Okari then shortly notified him that he had already been released and that he was on his way but from 11 pm his phone went off.

Okari was to drop the vehicle at Mureki’s home in Rankau area a few kilometres from where the vehicle was burnt, two tyres removed with the assailants believed to have been on another vehicle. The vehicle shell pointed out possible vandalism before it was burnt.

Since then Mureki claims he tried reaching Okari’s wife who said he had not returned home until it emerged on Tuesday that he had been killed by unknown assailants and the vehicle burnt.

Mureki says it is a norm for him to send Okari who is his mechanic to run errands for him and mostly drive his family when he is engaged elsewhere.

According to the police record at Ong’ata Rongai, Okari had physical injuries on the head inflicted using a blunt object.

Mureki has since recorded a statement with the Director of Criminal Investigations and police.

I gave it my best shot! Bensouda says in last briefing as ICC prosecutor