The Hustler Nation Intelligence Bureau (HNIB) agents have completed a FACT CHECKING assignment and now EXPOSE the Outright lies, Fiction and Propaganda Presented on the record by the Ruaraka THIEF aka CS @FredMatiangi in Parliament today.

It is so DECLASSIFIED! pic.twitter.com/eGlqJiGi7O

He revealed the information in Parliament on Wednesday. He had been summoned by the Committee on Administration and National Security to discuss recent changes made to the DP’s security team.

The properties listed by the CS include Weston Hotel along Lang’ata Road, a 15,000-acre ranch in Laikipia County, two hangars and five helicopters at Wilson Airport among others.

CS Fred Matiang'i: DP Ruto house is not a state lodge or a State House, the law is very clear it is his residence…… we in the security sector work to be right in terms of making decisions & not to being popular pic.twitter.com/k7ZK5Hmu28

Also included in the list is the Sh600 million Dolphine Hotel in Shanzu, Mombasa County, which he said has six state guards watching over the property. 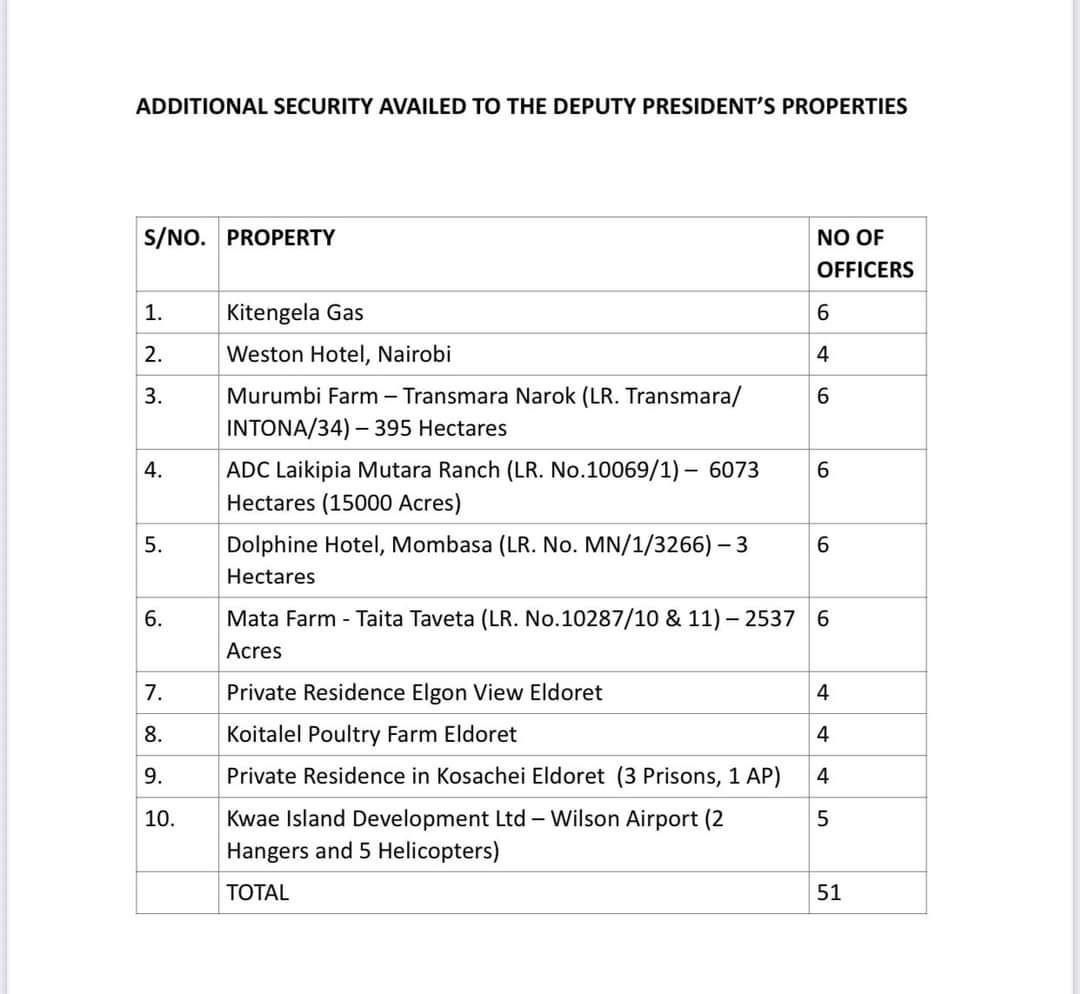 The beach front Dolphine Hotel in Shanzu, Mombasa while it was under construction on August 17, 2018. The 10 properties listed as receiving protection, according to CS Matiang’i, are:

The list of additional properties belonging to DP William Ruto that are getting state security, as shared by CS Fred Matiang’i in a statement to Parliament.

Now that Dr. Fred Matiang'i is a very transparent Kenya Government officer, in the spirit of transparency, he should list, on a website, every property of his fellow government officers protected by police including statistics on acres and hectares. We just want to see something.

Dr. Fred Matiang'i is currently on the floor of Parliament presenting documents listing the number of police officers assigned to Ruto. The guy has 257 cops assigned to him bana. 257 police officers na wewe uko Ting'ang'a shouting Hustler without even a rungu watching over you.

I was wondering why DP Ruto tweeted against these proceedings looking into his security. I also noticed CS Fred Matiang'i didn't resist appearing before the Committee. Now its clear that the facts were against the narrative pushed by the Hustler Nation on protection of the DP.

DP Ruto didn't want this security to be discussed in a Parliamentary committee , Now see how Interior CS Fred Matiang'i has exposed that he has 257 police officers guarding him and his properties where as 80 police officers even guard his chicken at koitalel poultry farm farm 😂