DCI sleuths visit school where pupils were tied on a Tree

Thiru Primary School in Nyahururu is now a crime scene and DCI detectives have launched a probe into their uncouth form of punishment.

DCI officers from Laikipia West have launched investigations into an incident where three pupils of Thiru Primary School were tied on a tree.

A task force led by Nyahururu DCC Moses Muroki has directed the office of the DCI to investigate the headteacher and deputy of Thiru Primary School in Laikipia West where three pupils were tied to a tree as a punishment for truancy and delinquency. 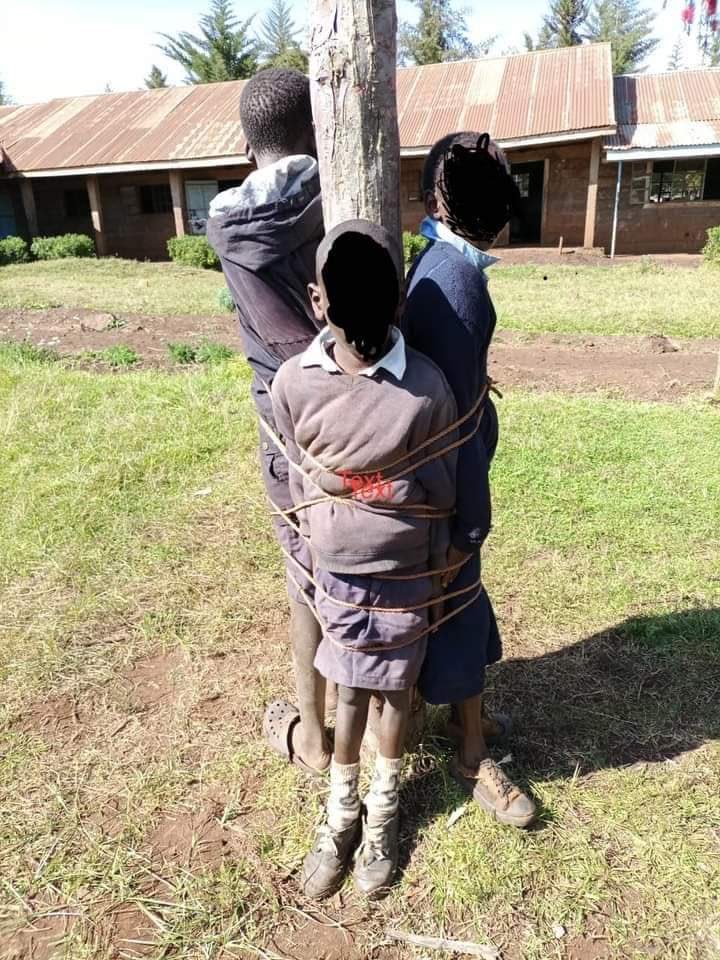 Nyahururu Sub-County Deputy County Commissioner Moses Muroki in a tour to the school together with TSC and child protection officials said DCI officers have taken the matter.

He confirmed that the incident happened in the said school even as it emerged that the school’s headmaster Shelmith Thimba and her deputy David Maina were behind the punishment.

The two are said to have posted pictures of the three on the teaching staff’s WhatsApp group and was from there shared on social media eliciting massive reactions among Kenyans.

“We have established that issue happened on August 20, and it was done in this school. It is wrong, we are no about it and we are sorry to children for what they went through,” Muroki said.

Rift Valley Teachers Service (TSC)Commission Quality Assurance Officer Irene Kandenge, who also visited the school, condemned the incident saying investigations are on course to establish those to be held liable.

“What we advocate as TSC is child protection. We are also looking at how teachers are dealing with learners. We are condemning what has happened and what we are saying is that no one has been declared guilty of an offence until the disciplinary process has been taken,” Kandenge said.