The full of shit Lamu Senator Anwar Loitiptip has surrendered to police following a gunfight at Kanu Grounds in Nanyuki town on Saturday.

The controversial Senator had gone into hiding following the gun drama event, as a probe to determine the reason was already beginning.

Joy Makena, 32, suffered a gunshot wound to her leg before being brought to Nanyuki Teaching and Referral Hospital for treatment. Her condition has been determined to be stable.

A gun belonging to the Senator’s security was retrieved with 13 rounds of ammo, and it was discovered that two cartridges had been expended, raising suspicions about the incident itself. 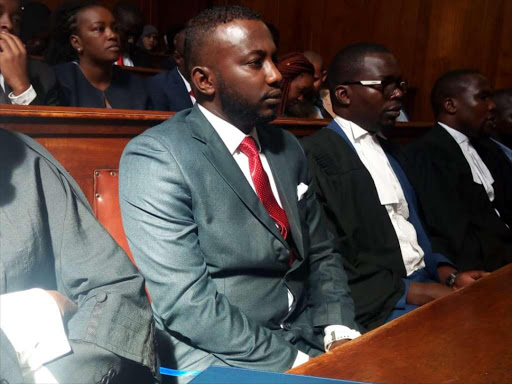 “We are conducting investigations and will be collecting statements of accounts from both parties before we make a decision on what charges to bring against the senator,” said Tarus.

According to the police, the shooting occurred at 2am on Saturday night.

“Joy Makena was shot on her right leg, above the ankle, after a quarrel ensued between her and the Lamu Senator,” read the police report in part.

It is reported that Senator defended himself saying that he shot in the air in self-defense and that he had no intention of shooting the woman in question.

“I am at a hospital for some checkup and will speak on the matter later, but the truth is that I was attacked by a knife-wielding gang last night,” said Anwar.

The Senator is not new to such incidents as it is reported he recently kicked a man in Lamu during Deputy President William Ruto’s visit in the region. The man identified as Francis Mugo had his mobile phone stolen in the process.

Cases of violence have also been leveled against him by a number of women including former Nairobi Governor Mike Sonko’s daughter Saumu Mbuvi. The two parted ways.