Photos of the Lamu Explosion aftermath

On Monday morning, a car collided with an IED in the Sankuri district of Lamu county, killing one person and injuring two others.

The explosives was believed to have been set by al Shabaab terrorists, who have continued to carry out assaults in the region, primarily targeting security vehicles. 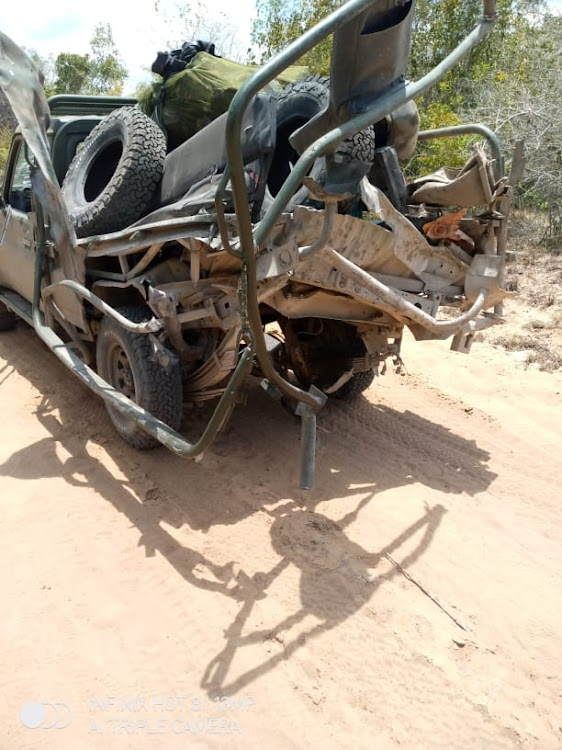 The deceased, identified as 28-year-old Aweer Community Conservancy ranger Ali Hamza Kimango, had hiked a lift in a county bowser that was supplying water to people of Boni Forest regions. The van had just departed Mararani and was on its way to Kiunga on the Lamu-Somali border. The event took place in Sankuri, deep within the vast Boni Forest, a notorious refuge for al Shabaab fighters.

According to Islamic customs, the dead was buried the same day at his house in Basuba, Lamu East. He leaves behind a widow and seven children. Irungu Macharia, Lamu county commissioner, said the truck driver and a high school student who hiked a lift were in critical condition after suffering severe burns.

“The driver suffered serious burns on the chest and hands, while the student’s injuries are grave as his lower body was literally blown apart. Both are in critical condition. The enemy might be from within. We suspect that those conducting these attacks are hiding amongst us. That is why we are asking the community to work with us by providing information that helps identify the culprits,” Macharia said.

He said they had intensified security patrols and were in hot pursuit of the assailants. The Sankuri area where the incident happened falls within the multiagency security Operation Amani Boni zones. The operation was launched in September 2015 by the national government with the objective to flush the militants out of the expansive Boni Forest.

On October 12, a KDF soldier was injured after their vehicle ran over an IED at a location between Milimani and Baure.

On September 26, 15 Shabaab militants were killed after their vehicle mistakenly ran over an IED planted by another group of the militia in the Ishakani area, close to the Lamu-Somalia border.

The militants continue to wreak havoc in Lamu and other areas close to the Kenya-Somali border, with most attacks targeting security vehicles on patrol.

The Shabaab militia is also believed to have deployed its operatives along the Kenya-Somalia border with much of their movement witnessed within the Kenyan territory, especially in Kiunga, Kisauni Dam, Sankuri, Basuba and Milimani areas of Lamu.

There are growing concerns that they will continue attacking security installations, main supply routes, public service vehicles, frequented public areas and other vulnerable points, as well as planting IEDs.

Police IG caught pants down on His Junior's Wife