Kenyan voters will go to the polls on August 9 and the presidential race has already shaped to a two horse race between Kenya Kwanza’s Dr William Ruto and Azimio’s Raila Odinga.

But other than the race shaping to a competition between the two, what is also clear is that the Deputy President Dr. Ruto will beat Odinga fair and square.

Dr. Ruto has maintained his status as the front-runner to win Aug. 9 elections as Odinga campaigns remain void of key issues affecting Kenyans.

Approved pollster findings released on Thursday shows that the DP enjoys a support of 61% with Odinga trailing at a distant 29%. A candidate needs to win more than half the national vote and at least a quarter of the ballots cast in half of the 47 counties to succeed President Uhuru Kenyatta.

Odinga used to be a force to reckon with in the run-up to the 2007 elections when he enjoyed the support of DP Ruto who was in his team. But since betraying Ruto to work with former VP Kalonzo Musyoka in 2013, the ODM leader has been a shell of himself.

He lost to President Kenyatta in 2013 and twice in 2017 forcing him to throw in the towel and lead the opposition lawmakers in backing the incumbent.

Odinga’s good days are behind, his political ideas are obsolete and he lacks the energy and freshness to inspire the current generation to the future.

He is aged and weak. The ODM leader is always suspending his countrywide Azimio la Umoja campaigns for weeks to seek medical attention in the United Arabs Emirates (UAE).

In 2020 the opposition chief took a three-week break from BBI campaigns after he was admitted at the Saudi German Hospital Dubai (SGH Dubai) where he underwent back surgery.

His deteriorating health has seen him sleeping in any small meeting including Azimio campaigns and the KICC meeting where he was unveiled as the coalition’s flag bearer.

He is not going for the presidency to change the lives of Kenyans but to find opportunities to overhaul the law and create offices for dynasty members including Gideon Moi who wants to be a chief minister in his government. 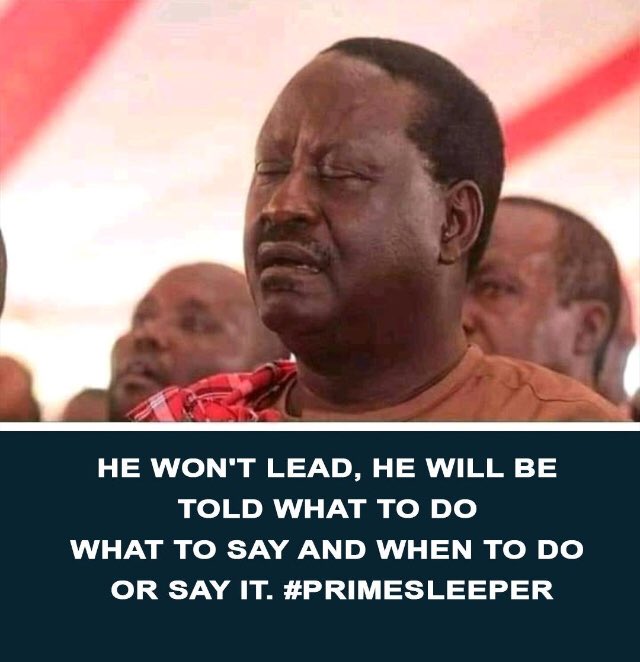 Odinga’s campaigns are not issue-based, he is too old to roll new skills off his sleeves but Mount Kenya Foundation and the outgoing president are hell-bent to plant him as president and create another term for the looting regime.

Prof. Makau Mutua, his diehard supporter and sycophantic blogger once admitted in an article that the ODM leader’s good days were behind after the old man was badly beaten by Uhuru in 2013.

That’s about a decade ago and today, Odinga is worse after using up all the luck ahead of his fifth stab at the presidency.

He has also been abandoned by his closest allies whom he betrayed to work with President Kenyatta who has killed the country’s economy.

Odinga’s failure to win the hearts of the formidable Mount Kenya constituencies has also dashed all his hopes of becoming the next president.

All he is relying on today is the government he is bootlicking to rig the polls in his favour. His elder brother Oburu Oginga who is almost clocking a century boasted last year that they will rely on ‘the system’ to rig the presidency in the coming election.

“….Why haven’t we gone to State House through votes? …because there was something that we were missing and that something is called ‘system’,” Oburu said in reference to government support.

The comments dented Odinga’s tired candidature leaving Ruto, 55 as the most preferred candidate to succeed Mr Kenyatta whom he backed in the two previous elections.