In what is perceived as his fight-back stance, pig farmer Dennis Itumbi has threatened to reveal names and how the President Uhuru’s team hacked IEBC computers to rig the 2017 elections.

He has started by putting his life before God in today’s dawn tweet. Will he name them or he will sit on it the same way he shelved the alleged Hotel La Mada videos?

Director of Digital Innovations and Diaspora Communications at the State House Dennis Itumbi was fired on his birthday.

Public Service Commission informed the public that Dennis Itumbi and four others are no longer State House employees after the GOVT terminated contracts of 5 Senior State House directors at PSCU, including Dennis Itumbi’s.

Then Nasa Presidential Candidate Raila Odinga, now AU’s special envoy and Handshake partner with Uhuru Kenyatta alleged that Hackers broke into the database of Kenya’s electoral commission and manipulated the results of the election.

Odinga rejected those results, claiming at a morning press conference that they were the result of an intrusion by hackers into the IEBC’s electronic voting system, set up to guard against vote fraud.

“These results are fake, it is a sham. They cannot be credible,” Odinga told reporters.

Odinga said a hacker, using the identity of the late IEBC ICT Manager Chris Msando, took control of the IEBC system at 12.37 am and began manipulating results to President Uhuru Kenyatta’s advantage.

“What the IEBC has posted is a complete fraud…to give Uhuru Kenyatta votes that were not cast…We have uncovered the fraud. Uhuru must go home and IEBC must be fully accountable. They gained full entry and created errors which allowed them to turn into a formula. Within 12 hours this attack on our democracy affected the election in all our counties. Uhuru had said he didn’t need votes to win…we don’t need him as our leader… I am saying this on behalf of those who participated in the election,” Mr Odinga told a news conference at the Nasa campaign headquarters in Westlands.

A former police officer identified as Calvin Otieno Ogalo, believed to be the mastermind of the dubious operations was nabbed. Ogalo, who allegedly hacked the electoral body’s system in the 2013 General Election, is suspected to have been in constant communication with a top Jubilee politician.

The 35-year-old is also on the radar of the Banking Fraud Investigation Unit (BFIU), which suspects that he was involved in the theft of Sh50 million from the Kenya Police Sacco. The syndicate which operates internationally is believed to have tried to hack the IEBC system four times last year.

Ogalo is alleged to have worked with two Russian nationals in coding a system that is reportedly capable of deleting, multiplying, adding data and manipulating voter register details. 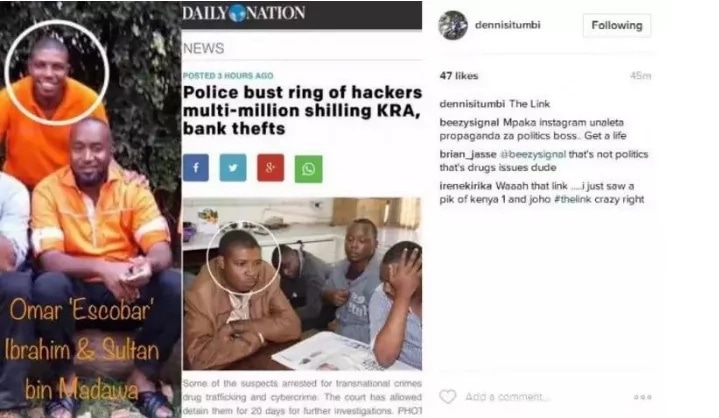 This comes at a time when State House Official Dennis Itumbi posted photos on social media in which Mombasa Governor Hassan Joho was with one of the suspected hackers. The gang which had been operating in Muthaiga, Nairobi CBD, Thika, and Roysambu, was also reported to have been involved in drug smuggling.

It is not clear what led to Itumbi sacking neither of his colleagues. A source at the State House told our news desk that it was long coming.

In November last year, Itumbi was a meme and the troll of the week after a video of an embarrassing moment capturing the event as he was being kicked out of the main dais at the Bomas of Kenya during the launch of the Building Bridges Initiative (BBI) taskforce report.

“The manhandling during the BBI launch in November last year was evident the ‘system’ was tired with him. But then, if you are a political appointee just know that you can be fired any time once the authority feels you’re no longer useful in their plots.”

Other sources state that PSC allegedly complied with the demands of CS Matiang’i and abolished the position through a letter dated 18th March and addressed to CS Matiangi. Analysts are now questioning if CS Matiangi has the power to fire State House staff.

Interior CS Fred Matiangi and PS Karanja Kibicho have been on the receiving end of DP Ruto’s supporters who accuse the duo of undermining the DP and his office.

In September last year, Former State House Digital Director Dennis Itumbi was dragged to court in a child maintenance row. The mother of the child through lawyer Enricah Dulo, argues that Mr Itumbi deserted the child from birth and has refused to provide any form of support. She said she had to stop working before giving birth to the baby.

Itumbi was ordered to pay Sh20,000 a month in child support pending the determination of the matter filed at Milimani Law Courts family division. The child’s mother was seeking an award of Sh50,000 as monthly allowance for the child.