President Uhuru’s family owned NCBA bank has been saved from paying a customer they spuriously listed on Credit Reference Bureau(CRB). 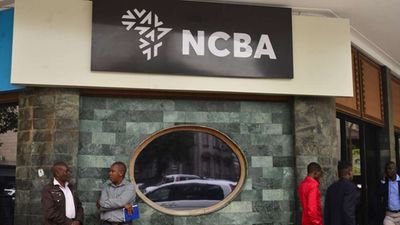 A transport and construction company had sued and demanded compensation from NCBA for damages allegedly suffered after Uhuru’s bank listed the firm as a loan defaulter.

Pekatewa Investments company Ltd sued the lender accusing it of writing to its directors and copying Credit Reference Bureau (CRB) in June 2013, falsely and maliciously alleging that the company’s loan account was in arrears for over 90 days.

According to the firm’s managing director Peterson Kamau Kiarie, NCBA sent him an apology for the erroneous listing but claimed that it was an afterthought.

He demanded a public apology insisting that the listing was circulated to its other bankers, among them Kenya Commercial Bank, which declined to advance his company a loan.

But Justice Cecelia Githua said although the company claimed that the publication of the letter caused damage to its business reputation, it failed to adduce any evidence to substantiate or to prove this claim.

“He (Mr Kiarie) did not however produce any documentary evidence to that effect and he did not claim that the plaintiff suffered any loss or damage as a result of the publication,” the Judge said.

In their defense, NCBA alleged that the erroneous listing was caused by systemic errors generated in the course of transitioning from the old to a new core banking system

The lender said the move was not deliberate or malicious and that the error was swiftly corrected and an apology made to the firm.

NCBA also said it wrote the letter in good faith in compliance with its statutory duties under the Banking Act and the Banking Regulations.

The judge said the company totally failed to discharge its burden of proving on a balance of probabilities that the lender caused its listing with the CRBs maliciously. 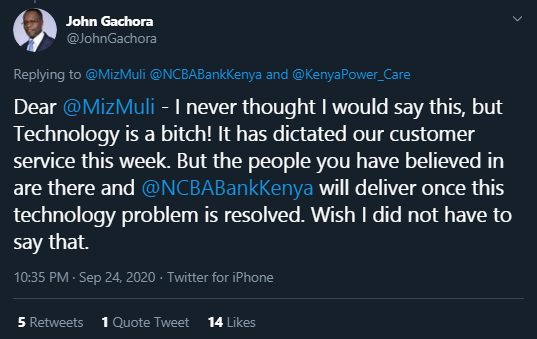 Just the other day, NCBA CEO used a vulgar language to respond to a customer which elicited mixed reactions from Kenyans On Twitter.

I am so disappointed with NCBA bank.

I have called twice this morning requesting for the bank statement for my company account. I have not received it as I write this email.

Ever since NIC emerged with CBA, your service has been TERRIBLE! I miss the old NIC

I have seen NCBA CEO, Gachora using the word ‘bitch’ in his response to a customer complaint. Welcome to 2020 customer care excellence 😎

To be fair, the word BITCH holds different meanings according to the context just like the work FUCK. And that’s why lawyers refer to the law as an ASS.

On this, the NCBA CEO is right to use the word BITCH. pic.twitter.com/qxzJWFhH8y