Fishermen turns their catch to DCI

DCI reported that Six mortar bombs were this morning discovered by fishermen, who were on a fishing expedition in Lake Victoria. 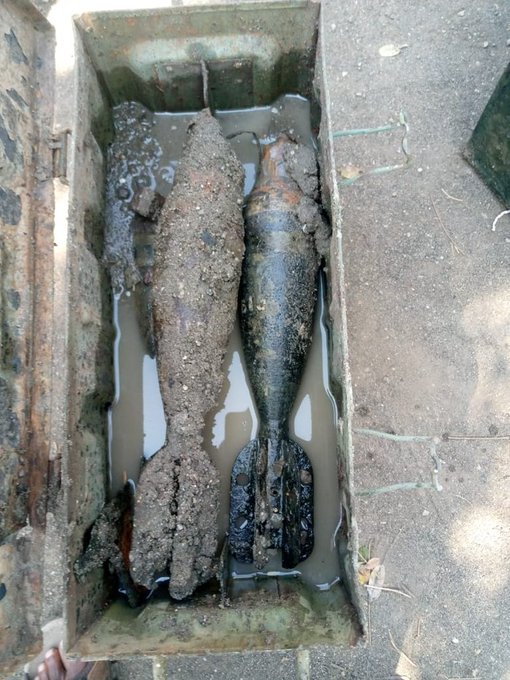 The fishermen had cast their nets in the still waters of the world’s second-largest freshwater lake, in the hope of a handsome catch.

Six mortar bombs were this morning discovered by fishermen, who were on a fishing expedition in Lake Victoria. The fishermen had cast their nets in the still waters of the world’s second largest fresh water lake, in the hope of a handsome catch. pic.twitter.com/USlAn4tIqm

According to a report on Wednesday by the Directorate of Criminal Investigations (DCI), the fishermen thought they had landed the biggest catch of their lives until they pulled out a box containing the explosives.

The fishermen were taken aback by the tremendous weight of the nets and assumed they had landed their biggest catch yet when they attempted to haul them in.

The fishermen, according to the authorities, laid their paddles on the boat’s floor in a cooperative effort to bring in their catch.

locally known as Mbuta, that would fetch a handsome pay at the local fishmongers’ market. In celebration, they downed their paddles on the floor of the boat and joined hands in hauling their heavy net back to the craft.

Their excitement would quickly turn to terror when they opened the metallic box and discovered six 60mm mortar bombs inside. Two fishermen are said to have jumped into the hippo-infested waters, afraid the explosives would detonate.

Two fishermen who were shocked by the finding immediately opted to jump into the hippo infested waters, fearing that the bombs would go off.
Three of the remaining fishermen steered the boat ashore, and reported the incident to the beach management chairman, Isaiah Ouko

Three others who were brave enough to tough out the unexpected discovery rowed to the shore and reported the incident to beach management chairman, Isaiah Ouko.

“Mr Ouko then escalated the matter to DCI detectives based at Mbita,” the report explains.  “The Mbita based sleuths immediately notified their Bomb Disposal and Hazardous Materials counterparts based in Kisumu, who rushed to Mbita and took possession of the cache,”