An official of the Sowesava Self-help group and nine other people were on Monday charged afresh with invading a piece of land in Nairobi’s Donholm Estate while armed with crude weapons.

They appeared before Milimani Senior Principal Magistrate Gilbert Shikwe and denied the charges.

They are accused that on May 24, 2018, at Donholm Phase 8 in Embakasi sub county, jointly with others not before Court and in order to take possession thereof entered on the parcel of land formerly No, Block 82 /7333 now part of Nairobi Block No/78/13 to Nairobi block 82/7856 the property of MS/Gidjoy.

They are also charged with invading the parcel of land in a violent manner by chasing away security guards while armed with crude weapons.

In March 2018, the accused persons were charged with maliciously damaging a perimeter wall valued at Sh144, 400.

In August, the four officials of the Sowesava self-help group were charged afresh with conspiracy to defraud Gidjoy Investment Limited 11.8 Acres parcels of land worth around 1 billion. 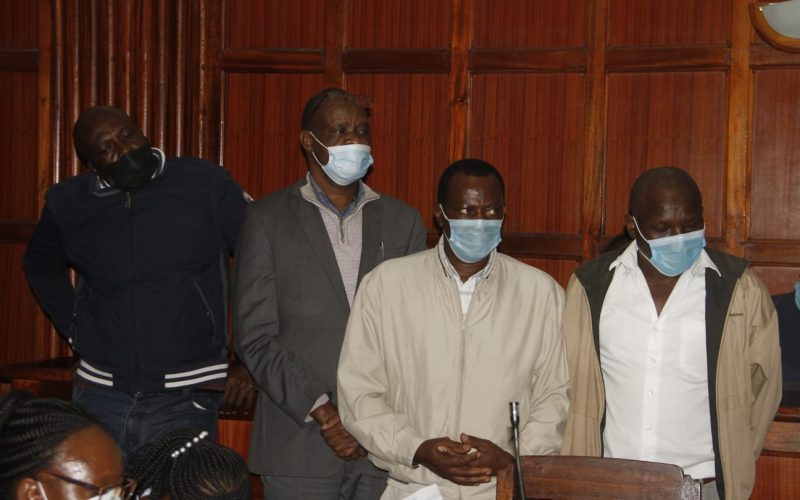 The four include former Chief of Kayole in Nairobi Alexander Hoops, Peter Gitau Muiruri, Peter Njoroge Kanika, and Patrobas Awino. They are accused of conspiring to defraud the said company the said property located in Donholm Nairobi by false pretending that they had a genuine title deed issued and signed by Rosemary Anyango Ngong’a, a Land’s Registrar

The offense allegedly occurred on or about 28 November 2001 jointly with others who were not before the court. The 11.8 Acres are; formerly Nairobi lock 82/7333 now part of the amalgamation of parcels Nairobi/block 82/7813 to Nairobi/block 82/7856.

They were accused that at around 0100 hours at Donholm phase 8 in Embakasi East sub-county within Nairobi County jointly with others not before the court, willfully and unlawfully damaged Gidjoy Investment perimeter wall fence valued at Sh144,000.

They all denied the charges and were released on earlier set bail terms of Sh20,000.

On Monday the case was coming for hearing where Mark Munge the Operations Manager at Gidjoy Investment Ltd was set to continue giving his evidence in chief.

Lawyer George Gilbert for the accused said he was not ready to continue with the hearing of the case because of the new amendments made in the charge sheet.

“I am not ready to proceed with the hearing, since new changes have been made in the charge sheet which we are not aware of”, he stated. The case will be heard on November 2.