Kenyans on Twitter (KoT) today went on Twitter to call for the speedy prosecution and jailing of former Family Bank of Kenya Chief executive Peter Munyiri.

Under the hashtag #FugitiveMunyiri, they laid out reasons why the man who now wants to run for Nyeri County Governor seat should be in Prison for aiding money laundering in the National Youth Service (NYS) scandal.

Peter Munyiri was adversely mentioned in the aiding of moving funds between bank accounts for NYS looters such as Josephine Kabura and Ben Gethi.

Kenyans are calling on the Directorate of Criminal investigations (DCI) and EACC to not let this guy off the hook.

A brief history of Peter Munyiri as narrated by cnyakundi.com blog


When the skinny man with a weird face and fake smile left his dusty village in Mathira and met Ben Gethi, the boy of high-level government tenderpreneurs; also from a dusty village in Karatina; the two may have quickly saw in themselves the perfect embodiment of everything that could have gone wrong with Kenya’s Ponzi scheme that is the financial sector. With time, they would make a mockery of it, and reap the country off in a scam whose scale no forensic analysis has unearthed yet. 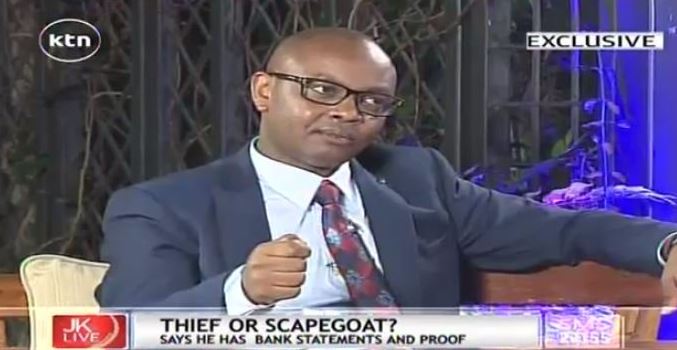 “Peter Munyiri is a greedy small man with an unbridled ambition for illicit wealth and raw, irresponsible power that accompanies it,” a Family Bank insider introduced him to us.

We learn from this insider that the source of Peter’s ambition to launder money started with a rejection by the old boys of Kenyan money; the men who raped the country when it was still in puberty. The scions of the economy butchers of the 60s, 70s and 80s.

They rejected him at Karen Golf Club but after he laundered NYS, in billions, a few accepted him at Muthaiga. He still reels from Karen rejection.

“Without money, getting noticed, let alone respected as an equal, was a tall order at Karen Golf,” we are informed.

Like Anais Nin, the dream (of recognition) was always running ahead of him, to catch up; to live for a moment, in unison with it, that required him to pull a scandal in such a grand scale that even if the Karen golfers were still not going to let him in; they would at least discuss him in low tones.

His first break came when he met Ben Gethi. He had earlier allegedly attempted to launder money at Kenya Commercial Bank under the strict and moral Banker Martin Otieno but this did not materialize. He was fired.
Using ethnic connections, he was placed at Family Bank; a bank which seemed to have been formed with the main aim of plundering public coffers.

Now heading a bank; Family Bank; he and Gethi would move with speed to rob Kenyans as Uhuru concentrated on Waiguru and ICC. 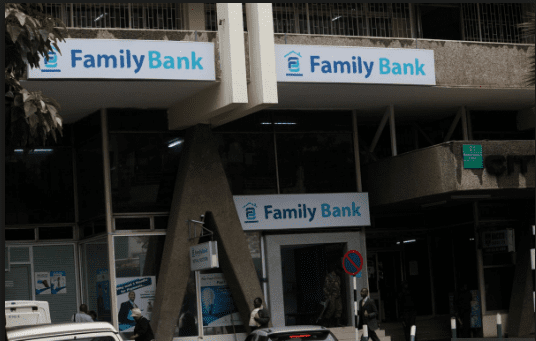 Gethi had connections in the highest places of the porous Uhuru regime.

Gethi would loot state coffers, in billions, assisted by the Josephine Kaburas of this world, and Peter Munyiri would be the man to clean the money of the blood of dying Kenyans for lack of medicine or food; and give the money some veneer of respectability in the guise of ‘real estate’ investments.

When DPP Keriako Tobiko ordered probe into the activities of Family Bank, it was as a result of a multi-billion shilling heist, planned and executed by a small clique of government functionaries whom John Githongo had in mind when he (together with Michela Wrong) authored ‘It’s Our Turn to Eat”.

Munyiri, as CEO, sat atop this pyramid scheme.

“As they worked on the NYS looting spree, Peter was promised the job of CEO of National Bank of Kenya. National Bank attracted him because of the weak systems. He also knew the big boys used National Bank to launder money. He didn’t care much about Family Bank sinking. However, the explosion of NYS scam left him exposed and his political friends scampered for a safe distance. Some started roasting him immediately,” observes our source.

Earlier, he had been safe in the hands of old thugs like Wilfred Kiboro; an avowed Kikuyu supremacist who also managed to turn Daily Nation from a respectable national newspaper to a Mt. Kenya spreadsheet where anti-Raila hogwash often find safe abode.

Kiboro lavished Munyiri with praise when in 2015 the proceeds of money laundering for Family Bank reached Ksh3 billion. Later in the same year; the Bank attracted authorities for money laundering.

In the NYS scam, money would be wired into an account at the bank then redistributed to other banks. While the bank distanced itself from the scam, it, later on, sent home nine of its managers who were linked to the transactions as a form of sacrifice something that didn’t please Kenyans.

Peter Munyiri later faced criminal charges for money laundering after his efforts to block prosecution failed (In our next article, we will focus more and remind Kenyans about the fraud and Munyiri’s efforts to kill the case)

We will also focus on efforts by Peter Munyiri to launder the NYS proceeds of crime in some ventures and review his past scandals including a land grabbing-case so that Nyeri residents can make a wise choice come 2022.

Lastly, we will focus on his shenanigans in the banking industry.

Kenyans had these to say

We can't allow every corrupt individual to be at the August House#FugitiveMunyiri pic.twitter.com/kPiD4455yz

#FugitiveMunyiri what happened to this case?? Why is this man and other known politicians walking scott free… pic.twitter.com/ChQhOrn5cN

“As they worked on the NYS looting spree, Peter was promised the job of CEO of National Bank of Kenya. National Bank attracted him because of the weak systems. @DCI_Kenya @ODPP_KE don't spend time in hate speech, IKO JAMAA #FugitiveMunyiri

Would you elect this man as Nyeri Governor come 2022?

– He has nine counts of criminal charges at the court
– Bank accounts that Munyiri helped open at Family Bank were used to Launder the Billions stolen from NYS@Nyeri_Speaks @NyeriYouth @NyeriYetu @DCI_Kenya #FugitiveMunyiri pic.twitter.com/vbNCQNvNqO

Nyerians can't give Kenya Kibaki then allow #FugitiveMunyiri to dismantle everything that has been built for the past 2 decades pic.twitter.com/7ouKl9H7Si

#FugitiveMunyiri if elected the governor of Nyeri will not hesitate to bring it down just as he did in Family bank @Nyeri_Speaks @NyeriYouth @NyeriYetu @DCI_Kenya pic.twitter.com/thErJN6II9