“It’s sad after spending Ksh23.5billion in-stadia development we could not upgrade two of our biggest stadiums to Caf standards.” The African organization stated in a statement on Friday that the two largest venues in Kenya had been banned for failing to reach the requisite criteria, dealing a significant blow to the national team Harambee Stars and Kenya’s representatives in Caf tournaments Gor Mahia and Tusker.

FKF has come out to defend itself, claiming that they warned the Ministry of Sports of the coming ban through Cabinet Secretary Amina Mohamed, but nothing was done to remedy the situation.

“The federation wrote seven letters to the Ministry of Sports in regard to the status of both the Nyayo and Kasarani stadium, including one directly to the Sports CS asking her to intervene and assist upgrade the two stadiums to international standards but nothing was done,” the source told this writer on Saturday.

Meanwhile, Kenyan Bulletin has obtained one of the letters dated October 13, 2021, signed by CEO Barry Otieno, and sent to Amina requesting the government to intervene before Caf takes action.

“We wish to inform your good office the federation has on numerous occasions written to Sports Kenya with regard to the Stadium Technical Infractions raised by Caf on the condition of both Nyayo and Kasarani. In this regard we wish to inform your esteemed office that the federation is in receipt of correspondence from Caf, informing FKF that the Caf Club Licensing, Senior Manager Muhammed Feizal Sidat, is scheduled to carry out an independent stadium inspection visit, on October 14, 2021, to re-assess the current status of Nyayo Stadium and Kasarani. Upon conclusion of Caf inspection mission and based on the current stadium compliance status, a final decision will be taken by Caf regarding the approval of the stadiums and the location of the next Fifa World Cup Qatar 2022 – African qualifiers matchday five and six. Consequently, whereas Sports Kenya has managed to perform some renovations around stadiums, FKF is gravely concerned that the two stadiums risk being banned and Kenya may also be forced to play its home matches abroad, as is the case in 12 other countries if the technical infractions are not improved as per Caf standards. Therefore, in order to ensure Nyayo and Kasarani stadiums are not banned by Caf, and to prevent the country from pecuniary embarrassment, the federation wishes to request your good office, to kindly intervene and ensure that the aforesaid stadiums are brought up to international standards, by urgently addressing the issues raised by Caf,” read part of the letter in our possession. 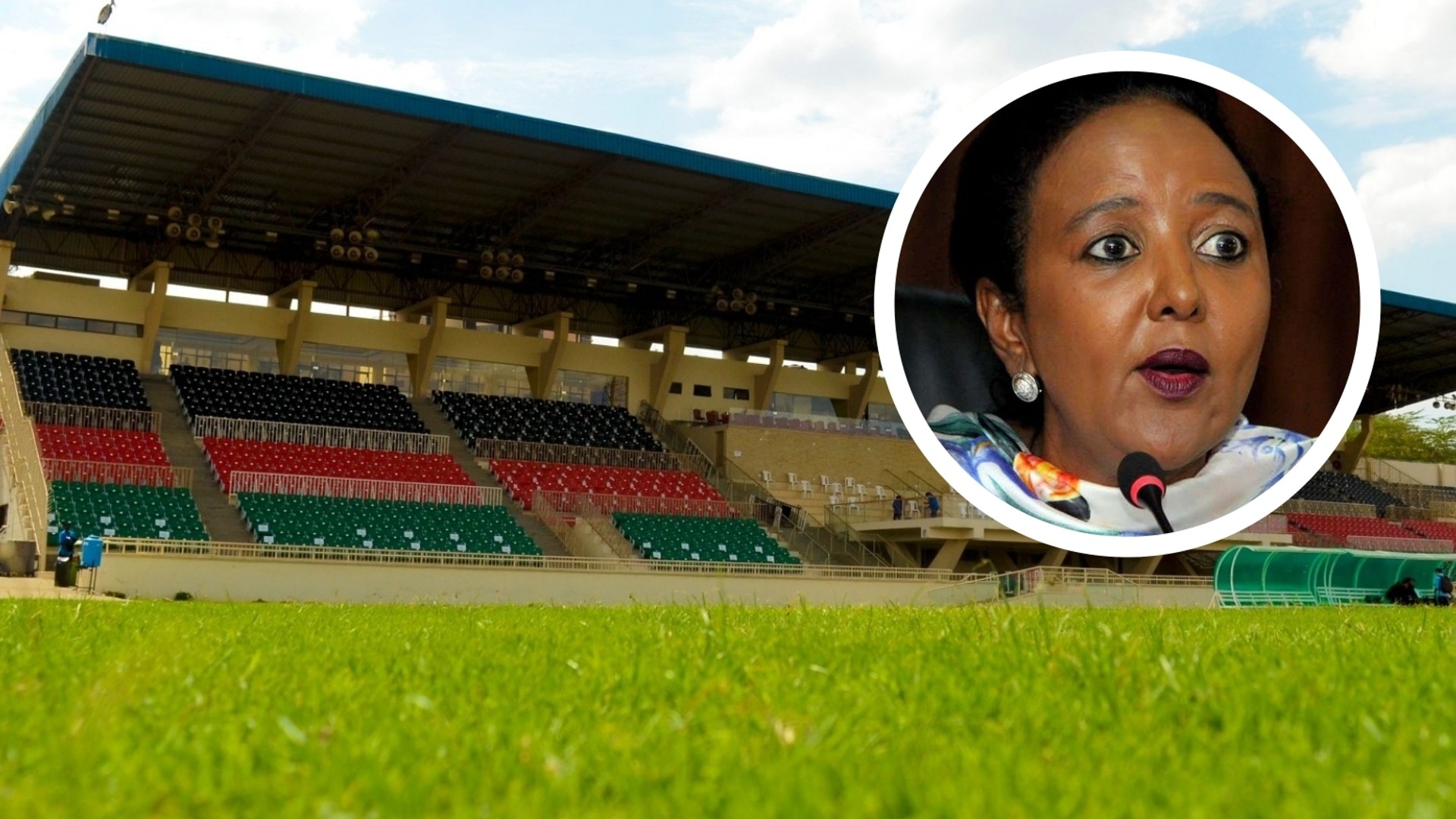 On confirming the ban Caf said: “Reference to the inspection visit conducted by Caf in Moi International Sports Centre Kasarani as part of the stadiums’ assessment for homologation for the Fifa World Cup Qatar 2022 qualifiers. Based on the inspection report, we regret to inform you the stadium did not meet the set minimum Caf stadium requirements and consequently will not be approved for the qualifying matches of the Fifa World Cup Qatar 2022 matchday five & six. Unfortunately, following the various temporary approvals given by Caf for the use of Kasarani Stadium in Caf competitions, the stadium still lacks several Caf criteria and requirements in order to properly host international senior competitions. As a result, we have taken the following decision: formal prohibition is made to use Kasarani for the remaining qualifying matches of the Fifa World Cup Qatar 2022,” a letter from Caf reads.

How does Caf come in and yet the CS was informed……lets separate oranges from Mangoes Bro….if it were in the develoed world….Amina is supposed to resign…Didn’t you read and understand they wrote to her and she ignored ? Infact i wonder who appointed a international Relations Diplomat to handle Ministry of Sports where she doesn’t even have a clue about regulations of FIFA and Caf ? You can go to hell with branding Caf Corrupt in this Ministry

Why stay with an under performing Cs
This is what has brought the Rotten Sports Ministry we deserve better!!
#FireCSAmina pic.twitter.com/AKwkvusyoh

CS Amina isn't the right person, she has looted enough, it's time she heads home, if that happens, it will be nothing but a blessing #FireCSAmina

Over 77 million that the ministry says it remitted to the federation never reached the FKF’s accounts, it was siphoned by ministry officials. #FireCSAmina pic.twitter.com/0JQhidl5wN

She has been the master of tenders awarding family members with tenders in the sports industry, she awarded her brother in law with a tender to supply motor vehicles at the safari rally this year. #FireCSAmina pic.twitter.com/g1lf4rWqCw

Money was allocated. Nothing is being done. The incompetency of the highest level #FireCSAmina
Rotten Sports Ministry pic.twitter.com/O0afEeqRiL

Rotten sport ministry is the reason as to why football in Kenya is not progressing.#FireCSAmina pic.twitter.com/PD8F7nnO1Z

In October, Sports Cabinet Secretary Amina Mohammed and the management of Athletics Kenya and the National Olympics Committee (NOC) appeared before the Senate over alleged poor display by Team Kenya at the 2020 Tokyo Olympics.

The Senate Labour and Social Welfare secured the Speaker’s nod to summon the officers after Nandi Senator Samson Cherargei filed a petition alleging many athletes and other team members were mistreated, thus the dismal performance.

Cherargei wanted the CS, Athletics Kenya and NOC to state reasons that led the country to lose grip on key races and events it had previously dominated.

“They should explain the preparation and the selection process of athletes and sports and government officials who went to the Tokyo Olympics 2020,” he said.

Kenya got 10 medals at the Olympic Games held in Tokyo, Japan and was ranked 19th in the world and first in Africa.

However, the performance was considered underwhelming compared to the 2016 Rio Olympics, where the country scooped 14 medals — six gold, six silver, and two bronze.

For instance, Team Kenya, for the first time in history, lost the 3,000m steeplechase title.

Mismanagement of the team, including lack of motivation where some team members missed kits, was largely blamed for the dismal performance.

“They should expound on the training kits and grants donated by various international partners to Athletics Kenya and how it was distributed to various training levels in Kenya,” he sought in the statement.

Cherargei also wants the Ministry of Sports to state any reforms that were implemented after the Rio Olympics that landed former Sports CS Hassan Wario in trouble.

The ex-CS was found guilty of abuse of office in the Sh42 million scandal of the 2016 Olympic Games in Brazil. He, however, escaped jail after paying a Sh3.6 million fine.

His co-accused Stephen Soi, who was the Head of Mission to the Rio Olympics Games was fined Sh114 million or serve 15 years in jail.

“They took advantage of their offices to include strange people in the Kenyan delegation to Brazil and paid them allowances which caused the loss of taxpayers’ money. I find them guilty as charged and convicted them accordingly,” Anti-Corruption chief magistrate Elizabeth Juma ruled.

Our Kenyan Clubs aren’t in a position to play at international levels simply because someone somewhere is working to their disadvantage. Amina has no good motives with our Sports

Let’s mention the games the Rotten Sports Ministry has killed

4). Football is on the verge of collapsing